The story has been told of how 72 children were recovered from a suspected child trafficker in Taraba state. 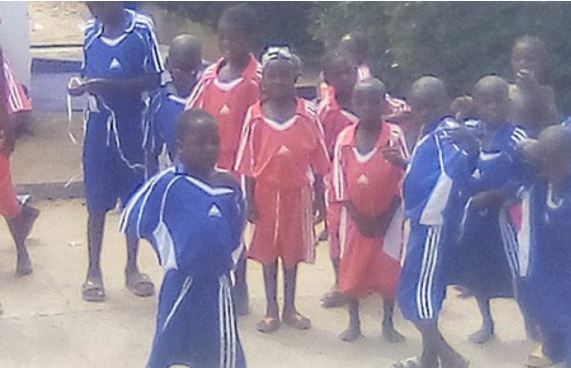 Some of the trafficked children rescued from Mary

Mary Yakubu, a forty-year-old lady, was arrested by police detectives while trying to convey 23 children to an unknown location.

Mary, a native of Maraban Baissa in Donga Local Government Area of Taraba State, was at the time of her arrest a teacher in one of the primary schools in Bali town.She wasarrested following a tip off by some people in the town who saw her with the innocent children and knowing very well they were not her biological children.

She was brought to Police command headquarters in Jalingo where she confessed that she took the children from their parents under the guise of enrolling them into primary school.

Mary Yakubu,when she was paraded before newsmen,said it was the parents of the children that gave her the children willingly to enrol into school.

She told police during interrogation that there were more children in her custody.

The suspect according to the spokesperson of the command, DSP David Misal, had claimed that it was the parents of the 23 children – 8 girls and 14 boys, that gave the children to her to give to any person willing to take care of them.

Daily Trust further gathered that this is not the first time the suspect was taking children from the area without the knowledge of the security or local government officials in the area.

She told police and officials of the state ministry of women affairs and child care that she had earlier taken 10 children.

A source in the state ministry of Women Affairs told Daily Trust that the suspect had earlier taken 10 children from another village in the same local government area to a school in Maraban Baissa before her arrest. She said 9 out of the 10 children she took away were later brought back.

Police spokesperson DSP David Misal told Daily Trust that the suspect was taken to court and later it was discovered that there were more children in her custody.

According to him, apart from the 23 recovered earlier, an additional 49 children were rescued from her bringing the number to 72.

Our finding revealed that Mary Yakubu usually go to remote areas and take the children from their parents under the guise of enrolling them into school.

The areas the suspect visits do not have roads and schools and she will bring the children to Bali town where she resides before taking them to a location in Maraban Baissa town in Donga Local Government Area of the state.

Daily Trust learnt that it is in Maraban Baissa that the suspect distributes the children to some individuals in different towns to work as house helps.

The state government, it was gathered, has taken over the matter. The government has also taken custody of the children who are lodged at Jalingo Motel.

The state ministry of women affairs and child welfare now provides security,feeding, medication and other needs.

A source at the ministry told our reporter that Governor Darius Ishaku had set up a committee to identify all the villages where the suspect took the children from as well as to identify parents of the children.

The governor has also directed that schools, clinics, market stalls and access road be provided in the areas.

The source said work on infrastructure in the areas has reached an advanced stage and the project will be commission next month when all the children rescued will be officially handed over to their parents.

The state government according to our findings will soon embark on sensitization tour of all the local government areas of the state to educate parents against given out their children to unknown persons.

It was learnt that there are similar cases of child trafficking across the state and many of such cases are not reported.

The first case of this nature was the arrest of a man who claimed to be the pastor of a church in Plateau State who was arrested with 17 children while trying to cross the River Benue at Ibbi town in Ibbi Local Government Area in July2015.

All the 17 children the pastor took were from the Bali Local Government Area where Mary Yakubu took the 72 children who were rescued by the police from.

It is not known if the pastor was charged to court.

Daily Trust gathered that Ruth Okoronkwo was arrested when the parents of one of the abducted children alerted the soldiers at the check point.