Abe was apprehended on Thursday by the 209 Quick Response of the NAF from Osun State after he was tracked down to Akure. 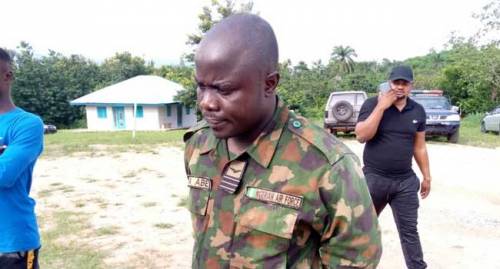 Olusegun Abe, a wanted fraudster, has been arrested in Akure, the Ondo State capital, for masquerading as an officer of the Nigeria Air Force (NAF), SaharaReporters reports.

Abe was apprehended on Thursday by the 209 Quick Response of the NAF from Osun State after he was tracked down to Akure.

The Acting Commander of NAF at Ipetu Ijesa in Osun, Owoche Morphy, said the suspect had been parading himself as the NAF Flight Commander by also extorting unsuspecting members of the public.

He added that Abe had been putting on the uniform of a soldier in the rank of a "wing commander" to defraud the family of late Lieutenant Ohai Idonije, a NAF pilot driver.

According to him, the suspect had asked the younger sister of the deceased to hand over all the original documents of her brother to him which he intends to use in claiming his benefits.

Morphy said the suspect had been handed over to the police for further investigation and prosecution, stressing that NAF would not condone any act that can tarnish its image.

The NAF boss said the family of the late officer had been told to direct all enquires on payment of death benefits to the Nigerian Military Pension Board Headquarters in Abuja.

When contacted by Sahara Reporters, Tee Leo Ikoro, the Spokesman for the Ondo State Police Command said the suspect had been moved to the State Criminal Investigation Department (SCID) of the command.

He added that the suspect was arrested through a joint effort by the NAF in Akure and called for further collaboration between the security agencies.