The story has been told of the businessman who was killed by kidnappers just three days after his traditional marriage. 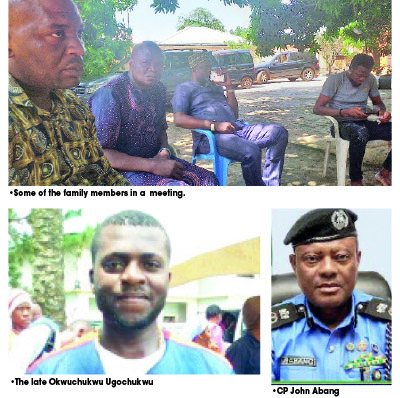 The agony of the family has been made worse by the fact the motive for the homicidal killing of Okwuchukwu has not been unraveled. Until his demise, Okwuchukwu was based in Aba, Abia State, where he was running a business enterprise. Prior to his death, he had returned to his village to prepare for his traditional marriage ceremony which took place on February 24, 2020. Three days later, in the evening, he stepped out of the family house to buy something at the Eke market very close to his home and never came back.

What the family thought was just a stroll by an able-bodied young man around his village turned into a nightmare as his disappearance lingered for days while his phones were switched off.

Narrating the sad story to Sunday Sun, Chukwuzubelu Ugochukwu, Okwuchukwu’s elder brother, said the unexplained disappearance of his younger brother made the joy of the marriage ceremony short-lived.

His words: “The whole family was aghast. He left the house with a tee-shirt and boxer shorts to buy something at the nearby market that evening and never returned. We kept on wondering what might have happened to him and had to make entry at the Nnobi Police Station the next day. We then mobilized young men to search for him. The executive of the Aba branch of our community meeting was informed too and we made another entry at the police station in Abia and continued the frantic search for him.

“As the days we went by, we had to engage some digital security tracking experts who used his phone line to review the record of his movements based on calls made with the phone and they made some startling discoveries.”

Giving further chilling details over the cruel fate that befell his brother, Chukwuzubelu said the tracking company narrowed the last phone call made on the phone to Nanka community which is very far from Awka-Etiti. The digital experts also revealed the identity of the possible abductors.

“Before this time, we had been through hell running round. We visited prayer houses, consulted prophets and security experts until the trackers narrowed it down to Nanka. We stormed the place and engaged the local vigilantes in the community who confirmed the identity of the pictures which the trackers got from their system.

“The vigilante people told us that the pictures tallied with some suspects they arrested weeks back for killing a young man. The vigilantes also disclosed that they recorded the video of the arrested suspects and posted same online after handing over the suspects to Awkuzu SARS operatives.

“They concocted the story that they killed him when he refused to pay them the N20,000 they had earlier agreed on. At this point we rushed to SARS to confirm what the vigilantes told us.”

Twists and turns at Awkwuzu SARS

Armed with viral video, the bereaved family went to Awkwu SARS, where the officers confirmed that the suspects were in their custody. After initially dribbling the family on the true position of their deceased brother, the officers then revealed that the deceased Okwuchukwu was buried in a shallow grave at the scene of the murder because the corpse was already decomposing when they were alerted by members of the vigilance group.  Chukwuzubelu also alleged that the officers demanded some money in the range of hundreds of thousands as pre-condition to lead them to scene and also carry out autopsy on the corpse. According to him, the suspects were at the verge of being released from custody as the SARS operatives had apparently believed the lie that the deceased was an unknown person from Benue while there was also an alleged financial settlement running into millions of naira between the suspects family and the SARS operatives.

Alarmed by the clandestine moves by the police at Awkuzu SARS to scuttle justice, the family ran to one of their prominent citizens, Chief Joe Martins Uzodike, a lawyer and politician who wrote a strong worded petition to the Commissioner of Police, Anambra State Command and also copied Governor Willie Obiano, the Chief of Staff to the Governor, Chief Primus Odili and the Attorney General and Commissioner for Justice in Anambra, Dr Uju Nworgu.

In the petition dated April 25, 2020, Chief Uzodike, Principal Partner, Osita Uzodike & CO and counsel to the petitioner chronicled the travails of the family since 23rd February 2020 and appealed to the Commissioner of Police to direct the Homicide Division of the Command to unravel the circumstances surrounding the gruesome murder of Okwuchukwu so that the law would take its appropriate course.

“Finally, we plead that after all the needful have been seen to have been done, the family of our client, be allowed to give a befitting burial to their son Okwuchukwu Ugochukwu.

“We are copying the petition to the state Governor, the Chief of Staff to the Governor as well as the Attorney General for their information and assistance, as it is clear to us that these groups of murderers are notorious constant killers of Anambrarians and Nanka is their safe haven. Your investigation will unravel more in your quest to make Anambra the safest state in Nigeria,” the petitioner stated.

Ifeanyi Ezembaukwu, the deceased’s uncle in an emotion laden voice recalled that his nephew was a peace loving young man who could not hurt a fly while alive.  He noted that the entire Awka-Etiti people in Aba, Abia state have been devastated over the terrible manner the young man’s life was ended while the most painful part of the unfortunate incident was the dead was labeled a gay by his killers, to  deceive the security that he was an unknown person from Benue state. Recalling that the family has incurred heavy financial losses since the incident happened following different places they visited and different people also contacted for assistance while the search lasted, he lamented that Nigeria’s criminal justice system doesn’t favour the poor at all.   Jude Eruchalu, cousin to the deceased also lamented the cover up in the murder. He said that while ensuring that justice is done in the matter, the police should unravel the circumstance surrounding the killing. “It’s true that our brother is dead but we want to know how he managed to get to Nanka in boxer shots and tee-shirt. What was the motive for his killing and all that,” he said.

The Police Public Relations Officer in the state, Haruna Muhammed, when contacted said the suspects had been paraded earlier by the command assuring that there will be no cover up in the crime.

The Commissioner of Police, Anambra State Command, John Abang, in an encounter confirmed that Governor Willie Obiano personally handed over a copy of the petition from the family to him for proper investigation. He said he has directed the State Criminal Investigating Department, SCID, to take up the matter, invite the family and carry out the exhumation of the corpse. He assured that as has been the tradition of the command under him, the matter would be given the desired attention to ensure that justice is served no matter the situation.