Abia state Chief Press Secretary Onyebuchi Ememanka has released more details about the health condition of the governor after he tested positive for coronavirus. 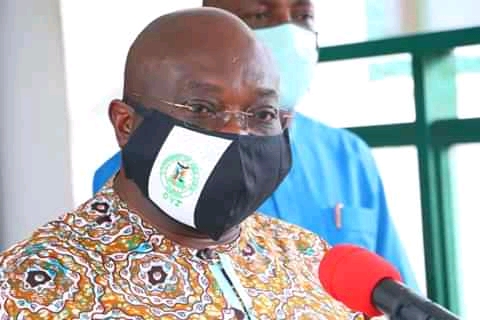 Okezie Ikpeazu, Abia State Governor
Abia Governor Okezie Ikpeazu is stable and in high spirit after testing positive for coronavirus, his Chief Press Secretary Onyebuchi Ememanka has stated.
Ememanka said that his boss who had earlier tested negative to COVID-19 decided to go for a second test as a measure of removing every doubt surrounding his COVID-19 status.
He disclosed a team of experience medical personnel are monitoring the health of his boss who had already commenced self isolation.
“The Governor whose second Covid-19 test returned positive yesterday said that his decision to present himself for a second test was to remove all doubts about his status, after testing negative initially.
“As your Governor, I have a responsibility to do what is right and keep our people fully updated about my health status”, Ememanka quoted Ikpeazu.
According to Ememanka, Ikpeazu’s maintained that testing positive to the virus is not a death sentence and appealed to residents not to panic.
Top Stories