A popular Delta state Bishop has been arrested by the police for allegedly forcing himself on a teenage girl. 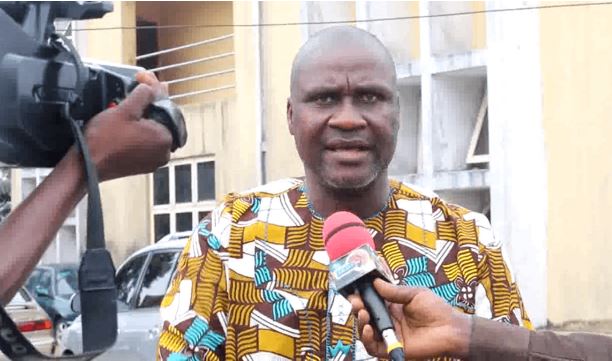 Bishop Elijah Orhonigbe
Policemen in Warri, Delta state have apprehended a popular Founder/General Overseer of Victory Revival Fasting & Prayer Ministry, Bishop Elijah Orhonigbe for allegedly raping a nineteen-year-old girl (names withheld) in Warri.
He was arrested on June 5th, after many days on the run and is currently cooling his heels in the police cell in ‘A’ Division Warri.
Confirming the arrest to newsmen in Warri, the Warri Area Commander of the Nigeria Police, ACP Mohammed Muktar Garba, said the cleric was arrested following a complaint by the mother of the victim at his office.
ACP Garba noted that the mother of the victim is a member of the church where her daughter was allegedly raped by the said Bishop.
“The woman brought the lady to the church pastor. I think what really happened is that the pastor drugged that lady and raped her. I personally took the lady to the hospital because she was in coma for two (2) days.
“We are looking for this pastor for the past three weeks. Later on, used my detectives to trace where he hides and I got him arrested and am charging him to court now.
This is somebody that I arrested since Friday. He has been in cell Friday, Saturday, Sunday and today Monday, I am charging him to Court,” ACP Garba said.
In a swift reaction, the suspect, Bishop Elijah Orhonigbe denied the allegations levelled against him.
The cleric who spoke with newsmen on his way out of the Police Station to Court said,”I did not rape her.”
According to Bishop Orhonigbe, “She came to church on that faithful day on the 20th of May. The mother brought her to the church for deliverance and I prayed for her in front of the altar in the presence of three people. Immediately, after the prayer, she left the church to 12. She came back 5 ‘o’clock with policemen and crowd saying this is the man. If not, I did not rape her.”
The Delta State Commissioner of Police, CP Mohammed Hafiz Inuwa confirmed the arrest of the Bishop in a telephone chat with Our Correspondent in Warri.
CP Inuwa said, “Yes, I am aware even though out of the state on official duties. I have been fully briefed by the Area Commander. It’s a case of rape in which the Bishop drugged the girl in the pretext of deliverance when he thereafter raped her."
Top Stories