Drama As Police Shoot Robber Who Was Fleeing With Stolen N3.5m In Awka


The suspect, Chukwuemeka Afor, engaged the police in a gun battle for hours while trying to escape with the money. 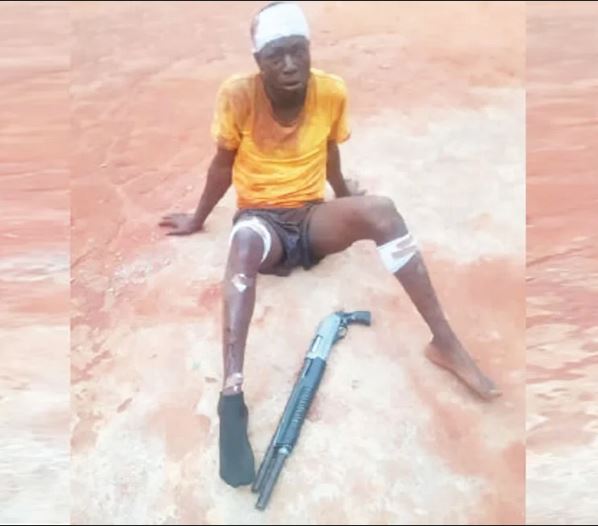 The police in Anambra State have gunned down a man, who allegedly snatched a bag containing N3.5m from a victim, near a new generation bank in Awka, PUNCH Metro reports.

An eyewitness told PUNCH Metro that the suspect, Chukwuemeka Afor, engaged the police in a gun battle for hours while trying to escape with the money.

“He was shooting indiscriminately. Four persons were hit during the gun battle. But the police overpowered him, because he sustained gunshot injuries in the process,” the eyewitness, who spoke on condition of anonymity, said.

The spokesperson for the police in the state, Haruna Mohammed, confirmed the incident to our correspondent.

He said the suspect was arrested and a firearm and the stolen money were recovered from him.

Mohammed stated, “Police operatives attached to the Department of Operations, Awka, and stationed at the Regina Caeli junction by the Zenith Bank Plc, along the Enugu-Onitsha Expressway, Awka, responded to a distress call that a hoodlum armed with an automatic pump action rifle was firing indiscriminately after snatching a bag containing N3.5m from one Ebuka Ukeakpu.

“The suspect, Chukwuemeka Afor, 25, a native of the Akpoga Nkanu South Local Government Area of Enugu State, who was almost lynched by a mob, was arrested, while the firearm and the snatched money were recovered from him.

“However, four persons were hit by stray pellets fired by the suspect, but their injuries are not life threatening.”

Mohammed said those who sustained injuries were rushed to the Police Hospital, Awka, while the suspect, who was beaten to a pulp by the mob, was responding to treatment.

He added that the case was under investigation after which the suspect would be brought to justice.