The Yobe-born Army Major revealed this while speaking with the BBC Hausa Service monitored by Vanguard on Thursday. 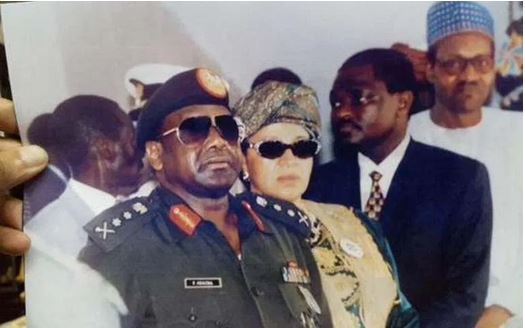 He said the former head of state died at a time a coup was being staged to overthrow him.

The Yobe-born Army Major revealed this while speaking with the BBC Hausa Service monitored by Vanguard on Thursday.

“Let me tell you something about Abacha. The 8th coup was being staged to topple him, at the time he died.”

Also speaking on the recovered Abacha loots, Al-Mustapha insisted that the billions stashed in banks overseas during the regime of late General Sani Abacha was not a unilateral decision.

He said it was a decision carried out after a meeting with relevant stakeholders and monarchs from all over the country.

The  Yobe-born Army Major, who many Nigerians alleged was part and parcel of the political intrigues and military maneuvers of the Abacha junta, spoke with the BBC Hausa Service monitored by Vanguard on Thursday.

According to him, “I’m saying this based on what I know and based on trust to Nigerians, their dignity and honor. ”

“I’ve said it that there was a period Nigeria was to be sanctioned. So there were plans to keep money overseas so that Nigeria and Nigerians would not suffer, when the sanction was imposed on the country.”

“We gathered Emirs and Chiefs from the South and from the North, together with VIPs of that time, those in government and those not in government.”

“We met at a place called Camp Bassey officer’s mess in the Brigade of Guards. It was there we deliberated on the threat to sanction Nigeria. Many decisions were made.”

“It is surprising…. you should know when a person is opening an account, it is that every person that will go to the bank for biometric capture.

“The person’s photograph will be taken, he will avail the bank with the required information, the source of the money, all these are requirements that must be met. The portfolio capital movement, also the time and date of the movement.”

“But for him, that had not gone to these countries where the money was kept, what justification have they to say the accounts belonged to him? Have they ever seen where late Abacha appended his signature or thumbprint that the money belonged to him.?

“I’m surprised by the way Abacha is been blackmailed .”

“I am surprised because when he assumed leadership, Nigeria had less than 2 billion in the foreign reserve.Things were not organized. “.

“But within 4 years and 8 months, he did what was possible to raise it to over 9 billion dollars ”

“But after his death, all these billions vanished in 9 months.”

“The person that raised Nigeria’s image and enhanced security is now the subject of insult. But those who shared the money he left, are still alive and untouchable. ”

“Let me tell you something about Abacha. The 8th coup was being staged to topple him, at the time he died.”

“But Nigerians knew of only 3:coup attempts against Abacha. There were 8 coup attempts, he died when they were plotting the 8th,” he said.