Attempt by the Presidential Assistant, Sabiu Tunde Yusuf to find his way out of the Aso Rock premises led to shooting as he struggled to zoom off. 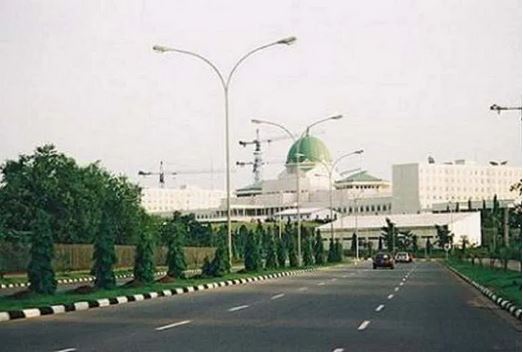 Fresh facts have emerged why there was shooting at the Presidential Villa, Abuja on Thursday evening.

Vanguard reliably gathered that attempt by the Presidential Assistant, Sabiu Tunde Yusuf to find his way out of the Aso Rock premises led to shooting as he struggled to zoom off.

A Villa staff who claimed to have witnessed the incident told Vanguard that Police officers attached to the office of the First Lady, Dr. Aisha Buhari and Sabiu came out through the artillery gate to the park opposite former Officers Mess.

The source said, “At about 6pm, I saw about four Police officers following Sabiu, he was wearing blue caftan and barefooted. We were wondering whether anything had happened to the President as Sabiu is a personal aide to the President and very influential in the government.

“All exit points in the villa were blocked because of him.

“There was a waiting one door vehicle with a driver and one other person. Immediately Sabiu managed to enter inside the vehicle, the police officers started struggling with the driver even as the car was on motion and it nearly hit other vehicles at the park.

” The driver managed to control the steering even as the Police Officers from the First Lady office made attempts to stop without success. The Police then ordered that the barricade that leads to the entrance get should be closed as they were shouting close the gate. Unfortunately, the security personnel at the gate had closed for the day and the barricade was up.

“As the Sabiu vehicle crossed the gate, there were gunshots about three times but the vehicle managed to escape and sped off.

“There was confusion everywhere that made the security personnel majorly made up of operatives of Department of State Services, DSS, who were on duty at the Pilot gate to rush to the scene.”

However, there were conflicting reports on the gunshots at the State House which was unusual and only witnessed during the military coup.

Besides, there were also conflicting reports on what led to the confusion. An account initially alleged that Sabiu had travelled out to London on a business trip with a well-known oil magnet from Lagos State, another one said that he went to visit his family in Lagos as the wife was said to have delivered a baby recently.

Sabiu who is popularly known as Tunde, a name he took after Tunde Idiagbon, the second in command to then Major General Muhammadu Buhari during the military regime is said to be very close to the President and highly respected at the Villa.

A Villa source told Vanguard, “Tunde is very powerful here. He is a nephew to the President and very close to the late Chief of Staff, Mallam Abba Kyari. Governors, ministers and all the who is who respect him so much.”

It was reported that on Thursday night, the First Lady accompanied by her children – Zahra, Halima and Yusuf, – took a team of policemen led by her Aide-De-Camp to forcefully confront Tunde following an earlier heated disagreement over his refusal to self-isolate after his trip to Lagos to see his wife, who had just given birth to a boy.

It was alleged that when members of the first family got to House Eight Guest Chalet of the President, where Tunde resides with his family, there was an altercation between him and Dr. Buhari, her children and her security aides.

Tunde, as a report has it flee on foot to the park opposite the non-functional Officers Mess where there was a waiting vehicle. His security aide according to an eye witness was also at the park and offered him a nose mask as he managed to enter inside the waiting vehicle.

It was alleged that he drove straight to the residence of Mamman Daura where he took shelter for the night.

A Presidential source said that Inspector General of Police, IGP Mohammed Adamu after receiving complaints on the incident arrived the Presidential Villa Friday morning and ordered that the Police Officers attached to the office of the First Lady including her ADC should be arrested and detained.

It was gathered that Tunde was told to isolate himself for 14 days as a precaution to protect the first family from the ravaging Coronavirus pandemic.

Recall that Dr. Aisha Buhari had ordered her daughter that returned from the United Kingdom at the early stage of the Corvid-19 outbreak in the country to quarantine herself for 14 days.

She also shut her office after hearing that one of her aides came back from a country identified as high risk country to protect other staff from being infected from the virus.

A source had said, “On Thursday, when the First Lady heard that he was still coming to work, she asked him to self-isolate but he told her that the President said he didn’t have to.

“Her insistence led to a heated verbal exchange between them and the President was later informed about this. The President, however, took sides with Tunde and didn’t see any reason why he should self-isolate at all.

“He said Zahra and Halima (Buhari’s daughters) left the villa to visit their in-laws when Halima’s husband’s uncle died recently and they didn’t self-isolate on their return. He also pointed to the fact that when his new Chief of Staff, Professor Ibrahim Gambari, went to Lagos too, he didn’t self-isolate on his return, so he didn’t see any reason why Tunde should. So, he overruled her.”

But infuriated by the arrest and detention of her aides, Dr. Aisha Buhari has urged the Inspector General of Police, to free her Aide-De-Camp and other police aides taken into custody on the orders of the police chief.

The First Lady in her verified twitter handle @aishambuhari, wrote: “That Covid-19 is real and still very much around in our nation is not in doubt. Consequently, I call on all relevant Government Agencies to enforce the Quarantine Act signed by Mr. President and ensure no one is found violating this law and the NCDC guidelines especially on interstate travel without the necessary exemptions for movement of essentials.

“Anyone who does that should at the very least be made to undergo 14 days mandatory isolation no matter who the person is, no one should be above the law and the Police command will do well to remember that.

“Finally, I call on the IGP to release my assigned Staff who are still in the custody of the Police in order to avoid putting their lives in danger or exposure to Covid-19 while in their custody.”

As at the time of filing this report, a source at the Villa said, “I guess, Tunde has obeyed the First Lady’s instruction.”