The crisis rocking the APC has taken another turn as President Buhari has been accused of supporting "illegality" by members of the party's National working committee. 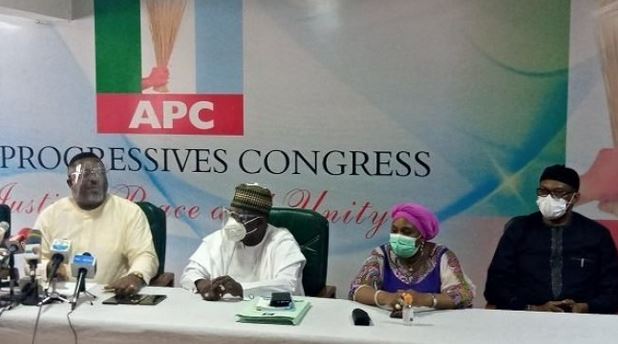 Members of the All Progressives Congress (APC) national working committee (NWC) loyal to Adams Oshiomhole, suspended national chairman of the party, have rejected the invitation to attend the national executive committee (NEC) convened by Victor Giadom.

Giadom had picked the presidential villa as the venue of the meeting, saying only NEC could solve the party’s crisis.

President Muhammadu Buhari, who has thrown his weight behind Giadom, has promised to attend the NEC meeting.

But in a statement on Wednesday, Hillard Eta, vice-chairman of the APC (south-south) and Waziri Bulama, acting national secretary, said an emergency NWC meeting held after Buhari declared support for Giadom.

He said after the meeting which lasted for about four hours, they resolved that attending the NEC meeting will amount to “embracing illegalities and turning a blind eye to the infractions on the constitution of the party”.

“We wish to unequivocally state that members of the National Working Committee (NWC) believe that the President was offered wrong advice or blackmailed into lending his weighty office to the illegality of the National Executive Committee meeting purportedly convened by one Victor Giadom on 25th June, 2020,” the statement read.

“We hereby respectfully implore Mr. President to kindly avail himself with facts of the matter regarding the impasse presently experienced by the party so as to guide him in his assessment of the matter because we are sure that the President, if properly advised, would come to the conclusion that the meeting convened by Chief Victor Giadom bothers on illegality and criminality.

“The National Working Committee (NWC) regrets to turn down the invitation to the illegal and unconstitutional National Executive Committee (NEC) convened by Chief Victor Giadom. We believe that attending such a meeting will amount to embracing illegalities and turning a blind eye to the infractions on the Constitution of our great Party.”

When he featured on a Channels Television programme earlier in the day, Gaidom had said he was worried that some leaders of the party were not willing to surrender to the NEC.

The APC crisis worsened after Oshiomhole was suspended.