It was gathered in Abuja on Friday that the provisions of Article 21(v) of the party’s constitution were being considered for activation. 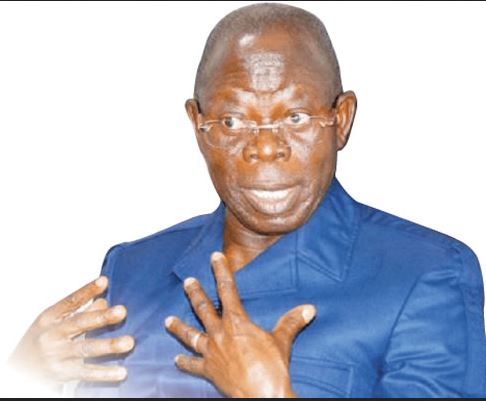 Members of the dissolved Adams Oshiomhole-led National Working Committee of the All Progressives Congress risk being expelled from the party should they go ahead with their threat to consider a legal action against the party on account of their removal from office on Thursday.

According to Saturday PUNCH, it was gathered in Abuja on Friday that the provisions of Article 21(v) of the party’s constitution were being considered for activation.

The National Executive Committee of the party had at a meeting presided over by the President, Major Gen Muhammadu Buhari (retd.), on Thursday dissolved the NWC. The meeting was also attended by the Vice President, Yemi Osinbajo; Senate President, Ahmed Lawan; Speaker of the House of Representatives, Femi Gbajabiamila, many state governors elected on the platform of the party and other key stakeholders.

The meeting, held inside the Council Chambers at the Presidential Villa, Abuja replaced the NWC with a Caretaker/Special Convention Committee, chaired by the governor of Yobe State, Mai Mala Buni, who was sworn in by the Minister of Justice and Attorney General of the Federation, Abubakar Malami.

But after the dissolution of the NWC, 18 members of the NWC loyal to the party’s sacked national chairman, Adams Oshiomhole, a few hours after their dissolution, issued a statement, insisting that the APC NEC meeting attended by Buhari was illegal.

But in the statement signed by the acting National Chairman, Hilliard Eta and acting National Secretary, Waziri Bulama, the group made it clear that they were consulting other stakeholders and their lawyers on the dissolution as well as other decisions taken by the NEC.

Meanwhile, a high-ranking party source who spoke on the condition of anonymity for fear of being reprimanded, said, “Consultations are ongoing. You know the powers of a President in the kind of system we practise in this part of the world. To dare the President especially if you belong to the party will definitely have dire consequences.

“When the President said at the meeting that those who dare the party’s resolve to halt the descent into anarchy should be prepared to face the consequences, he meant it. I’m aware that some of them have consulted their governors and have been advised to resist the temptation of going to court. This is a political problem which requires a political solution.”