An aggrieved Nigerian man has accused the Lagos state police of planting marijuana in his car and extorting him. 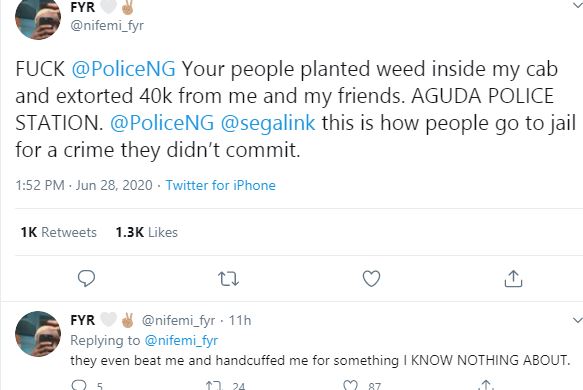 A Nigerian Twitter user has accused some police officers of planting weed in his car, leaving him with a swollen face and extorting him of N40k in Aguda area of Lagos state.

@nifemi_fyr said he was beaten and handcuffed for "something he knew nothing about".

"FUCK @PoliceNG Your people planted weed inside my cab and extorted 40k from me and my friends. AGUDA POLICE STATION. @PoliceNG @segalink this is how people go to jail for a crime they didn’t commit.

They even beat me and handcuffed me for something I KNOW NOTHING ABOUT.  I'm always hearing about it but TODAY i witnessed this shit with my own eyes WTF @PoliceNG  YOU PEOPLE IN THE POLICE FORCE ARE DISGUSTING. This police man punched my face twice wtf

They even said if we don’t drop 50k we aren’t leaving. we’re scared and terrified we just had to beg them belle they accepted 40k and let us go. Planted weed in my car and still extorted 40k from me said we are “yahoo boys” and we are doing drugs wtf. He didn’t then smell my mouth to confirm if i was smoking or not. i hate this country" .