Nigerians have turned the Governor of Kano state, Abdullahi Ganduje into a joke on social media. 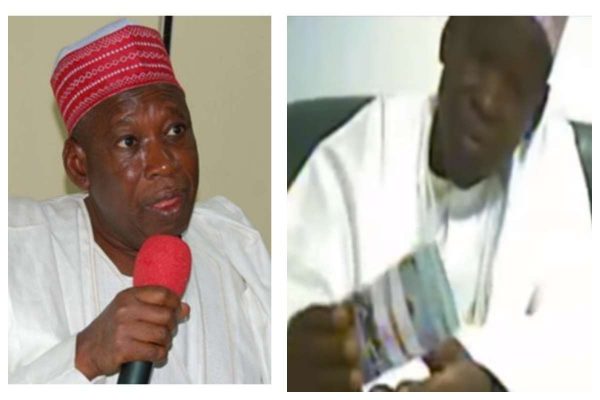 Abdullahi Ganduje of Kano state
The Governor of Kano state and Chairman, National Campaign Council of the All Progressives Congress (APC) for Edo State Gubernatorial election, Abdullahi Ganduje has become a laughing stock on social media after videos of him allegedly collecting bribe played endlessly on billboards in Edo state.
Recall that in 2018, Ganduje was enmeshed in a bribery controversy after he was allegedly caught on tape collecting millions of dollars in bribes from contractors in the state.
As a sitting governor who enjoys constitutional immunity, Ganduje has not been probed by any anti-corruption agency.
He claimed that the videos were doctored.
But as the race for the September 19 election heats up, the videos played endlessly on Edo’s biggest roundabout, Ring Road in Benin City, on Wednesday, drawing reactions online.

Obaseki must be a Nollywood actor 🤔🤣🤣🤣 pic.twitter.com/JXqNiqqdhg

I love this kind of pettiness 😂😂😂
Edo is not Lagos. pic.twitter.com/wxwTSU6Hba

Edo is not Lagos. pic.twitter.com/9Qij5PDDGF

This next level sweet ohh... Keyamo VS NASS.... Malami VS Magu... Abije VS Pantami... Ngige VS NSITF... First Lady VS IGP