The couple subjected their granddaughter to an untold hardship after she was accused of being a witch. 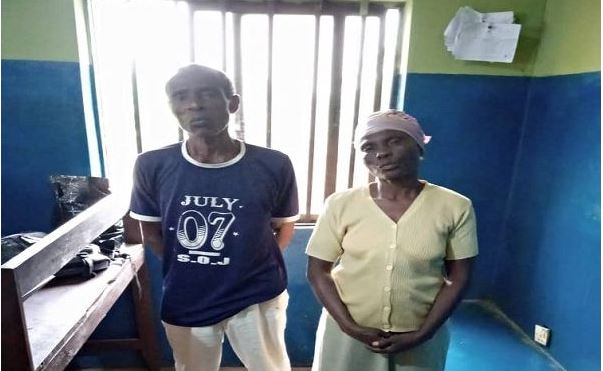 The Suspects, Joseph Akporugo, and his wife, Janet

The Ogun state police have arrested a 57- year-old man, Joseph Akporugo, and his wife, Janet, for allegedly maltreating their seven-year-old granddaughter on allegation she used her witchcraft to kill her biological father.

A statement released by the spokesperson of the state police command, Opeyemi Abimbola, says the little girl's plight came to the open after she walked into the home of a police officer living close to their home in Awa-Ijebu area of the state and showed him the wounds and scars all over her body that were inflicted by her grandparents.

Abimbola said the little girl who has been living with her grandparents since the demise of her father, gave touching account of how her grandparents would put rubber on fire and use it to burn her all over the body. She also told the Police that her grandparents accused her of using her ''witchcraft to kill her biological father'' and have subjected her to untold hardship.

Abimbola said the matter was reported at the Awa-Ijebu Police Station and the couple were immediately arrested. He said upon interrogation, the couple were unable to justify their actions.