A man has been left totally embarrassed after being rejected by his girlfriend in public. 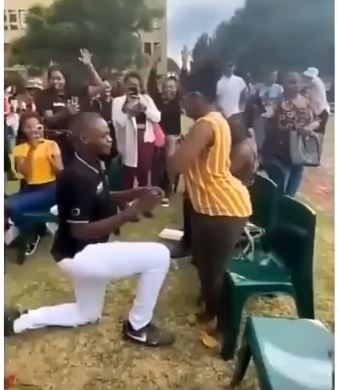 The woman left the man embarrassed after the incident
A woman has given her man the embarassment of a lifetime after rejecting his marriage proposal in public.
A video has showed the moment the man bent the knee to propose only for the woman to take the ring and throw it away in rejection.
The venue of the proposal appears to have been a park filled with people who were there for what seemed like an event, and this made the gentleman's experience more saddening.
The man had presented the lady with a flower as well as the wedding ring only to see it thrown away.
The gesture was cheered on by massive applause from bystanders who were both excited and expectant that the moment would end happily.
To the surprise of everyone, the lady, who initially created a posture of acceptance, took the ring on her finger and then threw it away.
She vacated the place without uttering any words. The entire moment was captured by different spectators on their phones.
See the video below:
Top Stories