A Nigerian couple have been overjoyed after waiting 18 years to have their children. 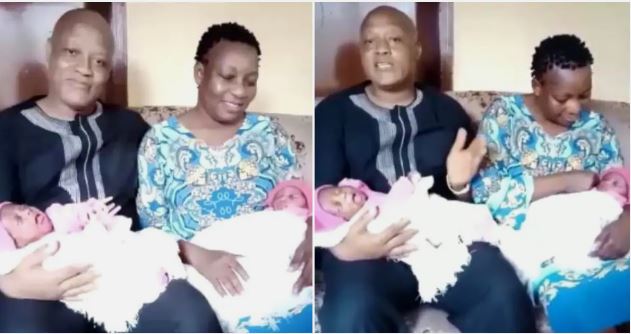 David Bankole
In what doctors have described as 'first', a Nigerian woman has given birth to a second baby 21 days after delivering the first child.
The set of twins came three weeks apart.
According to the father, David Bankole, he and his wife got married in 2003 and had to wait sixteen years before welcoming their first child, a girl, in February of 2019.
He revealed his wife quickly conceived afterward and on June 19, 2020, she gave birth to their second baby. They had a naming ceremony for the new baby.
He revealed it was after the naming ceremony that his wife started to complain she was having some movement in her stomach. They went to the hospital and it was discovered she had another baby in her.
The father narrated:
"To the glory of God, this union is almost 18 years now. After we got wedded in 2003, we waited for sixteen good years before God answered us and gave us our first daughter in February 2019. We were overjoyed. Before we knew it, she conceived and gave birth to another baby on the 19th of June 2020. We were so grateful to God. We had the naming ceremony.
Some days after, she said she was feeling some movement in her stomach. We were like maybe it’s because she just had a baby. However, as the days went by, she kept complaining of that movement in her stomach so we had to go back to the hospital because when we did scan prior to the delivery, it was one baby that reflected.
When we got to the hospital after several complains, they now checked her and found another baby. That was how we took delivery of the second baby on Friday, 10th of July and both processes were natural birth.” he said
Watch video:
Top Stories