An African woman has left many people amazed after what she did at a foreign restaurant. 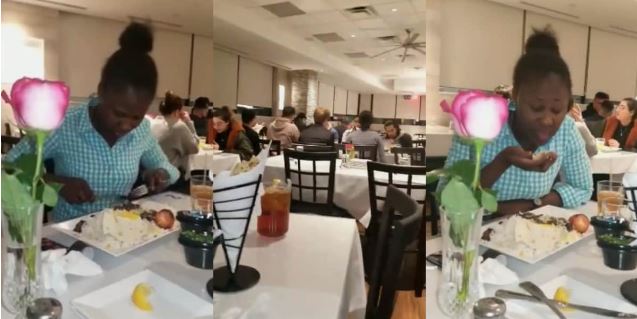 African woman eats with her hand at a restaurant
Mixed reviews have followed a video of an African woman using her bare hands to eat food after struggling with fork and knife at a foreign restaurant.
Social media commentators hailed her while others condemned her action, saying it is very embarrassing.
The African lady, who was the only black-skinned person in the restaurant, decided to publicly violate table manners and do what would give her true satisfaction.
She tried many times to use the fork and knife but failed, only ending up using her bare hands to eat in public.
See some comments below:
Leslie Anim Sampong condemned the lady's actions calling it a village lifestyle as she could have found a better alternative than what was displayed in the video:
According to Shado Maurice, the lady's actions show she could solve any problem and he would actually want to marry her:
Vietnam Love also mentioned that while it may be great to follow one's traditions, it is also good to learn and adopt different cultures when the need arises.
Watch video below:
Top Stories