The police officer who shot at a couple while the wife fainted afterwards has been arrested. 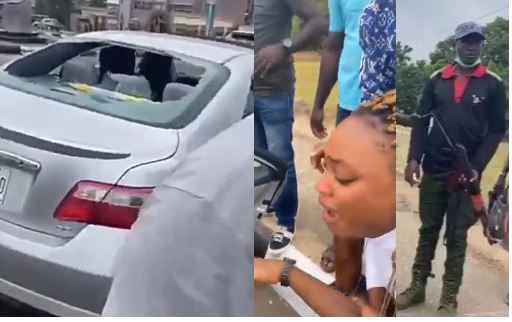 The Lagos state police command has arrested the police officer who allegedly fired a gunshot at a moving vehicle of a couple with their children inside at the Central Business District, Dr Nurudeen Olowopopo Way, in front of Japaul House, Ikeja, Lagos state on Sunday, July 26.

The viral video surfaced of the damaged car  after the police officer allegedly shot at it.

Twitter user @ewejeoyewole, shared the video online and said the wife of the man who was riding the car, fainted shortly after the officer fired the gunshot that shattered the glass of their car. The police officer dressed in a Mobile Police outfit was seen brandishing an AK 47 gun.

The video went viral and many Nigerians condemned the action of the police officer and demanded his arrest.

The spokesperson of the state police command, Bala Elkana, who confirmed the arrest of the officer, said an investigation has commenced into the incident. He said the police are already in contact with the affected family and the destroyed vehicle has been repaired by the police.

According to Bala, the erring officer was on an escort duty ''going somewhere.''

“I am aware of that incident. The policeman is in custody and we have commenced an investigation into the circumstances that led to that incident. Nobody was injured, nobody was killed” Elkana told ICIR.