Fani-Kayode Blasts Dogara, Says He's Is Under Luciferean Spell To Have Gone Back To APC


Dogara recently dumped the Peoples Democratic Party, PDP and returned to the APC where he was two years ago. 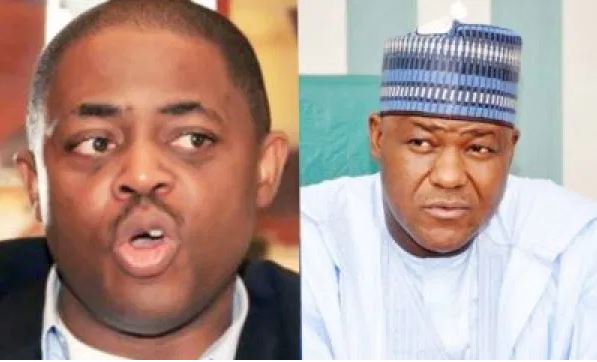 Former Aviation Minister, Femi Fani-Kayode says he is convinced that the former Speaker of the House of Representatives, Yakubu Dogara is under a Luciferean spell to have gone back to the All Progressives Congress, APC.

Dogara recently dumped the Peoples Democratic Party, PDP and returned to the APC where he was two years ago.

Reacting to the development, Fani-Kayode said: “I am convinced that the former Speaker has been put under a Luciferean spell and is the victim of some form of demonic ritual, voodoo and witchcraft.

“I expect nothing less from the APC because that is their stock in trade. They are a party whose leaders are well versed in the black arts, the occult and sorcery.”

He said Dogara was not just a leader in the PDP but that he was also Speaker of the House, saying that when he left the APC and joined the PDP he was welcomed with joy and open arms and enjoyed immense goodwill in the party and always exhibited the traits of a kind-hearted, soft-spoken and warm gentleman.

“He is also a very good Christian. Given all this I cannot understand how such a good man can leave the light of the PDP and willingly enter into the darkness of the APC. It is utterly unbelievable and totally inexplicable.

“This is especially so given the fact that I happen to know that my dear friend and brother Governor Bala Mohammed of Bauchi state treated him with so much respect, warmth, generosity and kindness,” he said.

Fani-Kayode said his prayer was that God delivered Yakubu and cause him to retrace his steps and come to his senses, as it was never too late to return to the light “and I believe that one day he will. This is because nothing good can come from the darkness of satan and those that bask in it and that worship and serve him.”

He said nothing wholesome could ever come out of the APC “because it is a party of heartless and merciless thugs, cultists, fraudsters, rogues and gangsters and it is a gathering of desperate and relentless vampires and power-seekers that trade in blood and that thrive in subterfuge, evil and all manner of skulduggery.

“The APC is the darkness that seeks the darkness. It is poison. It is utterly and completely evil and has been nothing but a plague on our nation.

“Yakubu is far too good to be part of what is essentially a bloodsucking coven of warlocks and witches and I have no doubt that his great, gallant and noble Sayyawa people, whom I am very close to and who I know well, will never follow him there.”

He urged him to remember that there is no fellowship between light and darkness and that he is a child of light and a son of the Living God.

“I implore him to get deliverance, retrace his steps and leave the camp of the Egyptians and Philistines before it is too late and before they use, dump, rubbish and destroy him. I urge him to return to God and to the ranks of the God-fearing, the righteous and the faithful and to be the man that the Lord has destined him to be,” he said.