The couple has been married for over five years and had become worried when the 41-year-old woman could not conceive. 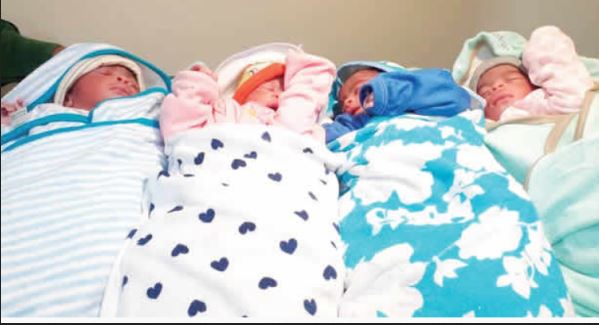 There was celebration at the Federal Medical Centre, Ebute Meta, Yaba, Lagos, after a 41-year-old woman identified as Mrs Maureen Anyaegbu, was delivered of quadruplets.

The babies, three girls and one boy were reportedly delivered on August 6 by a team of 20 medical personnel in a surgery that lasted six hours.

Maureen and her husband, Nonso, had been married for over five years and had become worried when the 41-year-old woman did not conceive, The Punch reports.

They were said to have gone to different prayer mountains and had also sought medical help.

Nonso revealed that throughout their waiting, he ensured no one pressured his wife or blamed her for their lack of children.

The 43-year-old man explained that when his wife became pregnant, they hoped for only one child, but were surprised when the scan result showed triplets.

The quantity surveyor said he was excited when the doctors announced his wife had been delivered of quadruplets.

“When my wife took in, we went for a scan, which showed it was not one. In the latter days of the pregnancy, even up till two days to delivery, the scan stated it was three.

“But on the day she was in labour, the matron came out and said, ‘Congratulations, we brought out four babies.’ It was a miracle. We have been praying to God for one or two, but he chose to shock us with four,” he said.

Nonso urged couples waiting for their own babies to be patient and not neglect medical help.