It has been revealed that some schools are collecting money from students to allow them to cheat during exam. 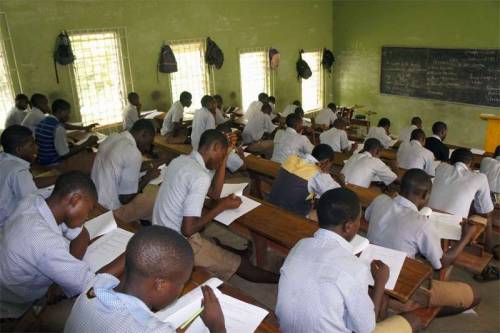 File photo
A new report by Sahara Reporters has claimed that some public secondary schools in Imo State are reportedly charging students N2,000 per subject to provide them with answers to questions in the ongoing West African Senior School Certificate Examination.
The school owners met with students before the commencement of the examination where they informed them that they would provide the answers if each student paid N2,000 per subject.
A relative of the students, who spoke with our correspondent, said the schools claimed that majority of the students might fail because of the Coronavirus lockdown and unpreparedness for the examination.
The relative also said the school claimed that the money would be given to each invigilator monitoring the examination.
“The school management held meetings with their students and it was agreed they pay the N2,000 to settle WAEC invigilators to give them way for exam cheats.
“School principals in public secondary schools in Imo State are charging WAEC students N2,000 per subject as sorting fees to settle WAEC invigilators.
“They said the money will be to allow their students to engage in exam malpractices in the various subjects because of their unpreparedness for the exams caused by COVID-19 closure of schoolse since March 2020,” the relative said as he pleaded anonymity.
The relative stated that some schools in the rural area of the state wire collecting a lesser fee from the students.
“Other public secondary schools in rural areas are paying N1,500 against N2,000 paid in urban public schools.
“The schools came up with the plan so they can collect money from the students.
“The public schools are to generate over N300,000 per day and the maximum they will give WAEC invigilators will be N50,000 while the balance will be for the school management,” he added.
The examination, which started today, August 17, is scheduled to end on September 7, 2020.
Top Stories