The Companies and Allied Matters Act, 2020 has been described as satanic by the Christian Association of Nigeria. 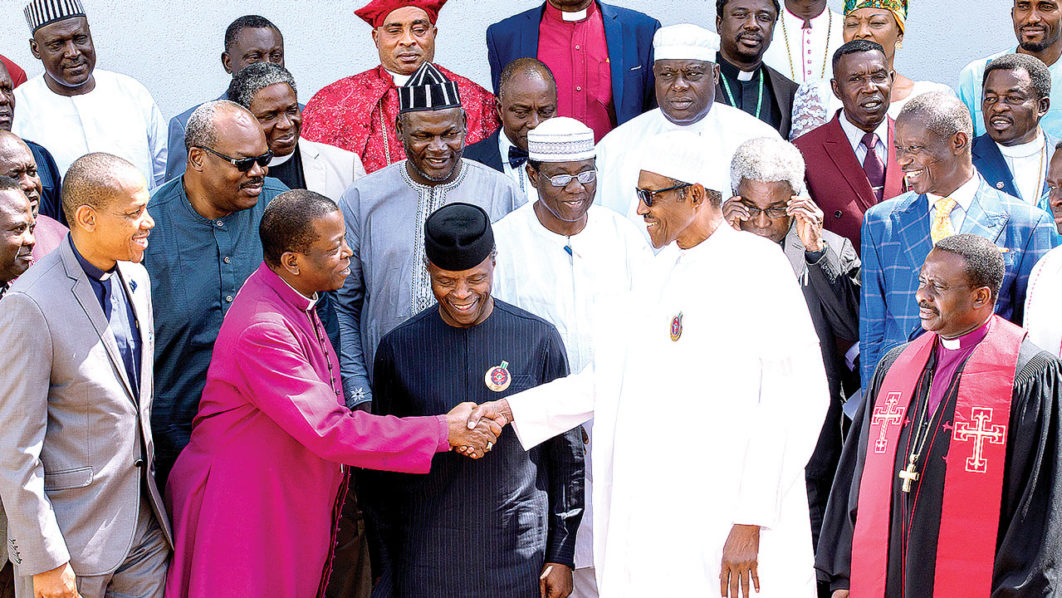 President Muhammadu Buhari and CAN officials
The Christian Association of Nigeria has said it will not accept the Companies and Allied Matters Act, 2020 “because it would snuff life out of the church and rank the church as a secular institution under secular control.”
Recall that President Muhammadu Buhari had on August 7 signed into law, the Companies and Allied Matters Bill, 2020. The bill which has been passed by the National Assembly replaced the 1990 CAMA.
According to a report by Punch, the Christian body described as “satanic”, section 839 (1) and (2) of the law which empowers the supervising minister “to suspend trustees of an association (in this case, the church) and appoint the interim managers to manage the affairs of the association for some given reasons.”
The PUNCH had earlier reported that the Presiding Bishop of the Living Faith Church Worldwide, Dr David Oyedepo, had also advised the Federal Government to expunge the part of the law that gives the minister the power to remove the board of trustees of churches without recourse to the court.
CAN in a statement signed on Thursday by Adebayo Oladeji, Special Assistant on Media and Communications to CAN President, Rev Samson Ayokunle, noted that the Federal Government has declared war on the church if it moved on to implement the law.
The statement was titled, ‘Christian Association of Nigeria (CAN) rejects CAMA Completely.’
The statement read in part, “The leadership of the Christian Association of Nigeria rejects outrightly the Companies and Allied Matters Act, 2020 that was assented to by President Muhammadu Buhari recently.
“The law, to say the least, is unacceptable, ungodly, reprehensible, and an ill-wind that blows no one any good. It is a time bomb waiting to explode.
“While we are not against the government fighting corruption wherever it may be found, yet we completely reject the idea of bringing the church, which is technically grouped among the NGOs, under control of the government. The Church cannot be controlled by the government because of its spiritual responsibilities and obligations.”
CAN queried, “How can the government sack the trustee of a church which it contributed no dime to establish? How can a secular and political minister be the final authority on the affairs and management of another institution which is not political? How can a non-Christian head of government ministry be the one to determine the running of the church? It is an invitation to trouble that the government does not have power to manage.”
It advised the government to “face the business of providing infrastructure for the people. Let them focus on better health provision, food, education, adequate security employment, etc. The government should not be a busy body in a matter that does not belong to it. The government does not have the technical expertise to run the church of God because of its spiritual nature.”
“If the government is bent on imposing a law on us which the entire Church in Nigeria is against, then, they have declared war on Christianity and the agenda to destroy the Church which we have spoken against before now is coming to the open more clearly. If you cannot give us good amenities of life, we would not allow you to take away our liberty to worship our Maker,” it vowed.
CAN, therefore, called on the President, Major General Muhammadu Buhari (retd.), to “stop the implementation of the obnoxious and ungodly law until the religious institutions are exempted from it” and “return the law to the National Assembly for immediate amendment.”
Top Stories