The pronouncement has stirred reactions from some Nigerians on social media who accused CAN of disgracing Christianity in the country and dragging itself into partisan politics. 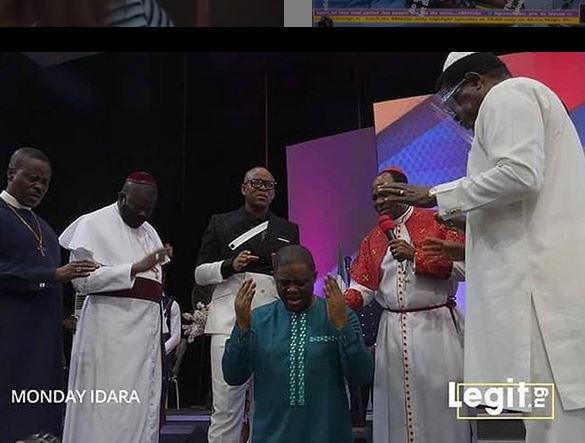 The Christian Association of Nigeria, CAN has come under attack following the declaration by its Lagos chapter Chairman, Apostle Alex Bamgbola that Femi Fani-Kayode would become the president of Nigeria someday.

The chairman of the Lagos State chapter of the Christian Association of Nigeria (CAN), pronounced that the former Minister of Aviation, will rule Nigeria someday if he remains humble.

The pronouncement has stirred reactions from some Nigerians on social media who accused CAN of disgracing Christianity in the country and dragging itself into partisan politics.

Here are some comments gathered by DailyPost from Twitter:

@Obiagu “CAN will never tell these Politicians the truth. All they do is sell themselves short for a share of the National Cake.

@peacemaker “ Even FFK accepted the lies that he will be president on day.”

@Rotilaw “ This is unfortunate. Statements such as this drag CAN into the arena of partisan politics and undermines its ability to effectively represent Christian’s in the country.”

@Sir_Algon “ Mosques and churches today are the number one problem to the poor people of This Country.”

@Tobi “ Fani-Kayode and the CAN chairman are both jokers. See why some Christian leaders fall hand.“

@Yeancah19 “ That’s probably the reason for his Nation tour and Press conferences.”

@Bazzrozay “ CAN has been bankrolled.”

@Saintoemirate “ These so-called pastors self…. After, you will tell the youth in your church they are leaders of tomorrow and you are telling ffk he will rule,,, abeg na wash.”

@Kayneul “ CAN chairman is trying to secure the bag, so don’t let them fool you. They’re all criminals. We don’t need leaders like that anymore.”

@Dr_fizzle “ This is appalling for Christianity in Nigeria.”