The Nigerian army has been criticized for ambushing and killing a militant leader who had already surrendered. 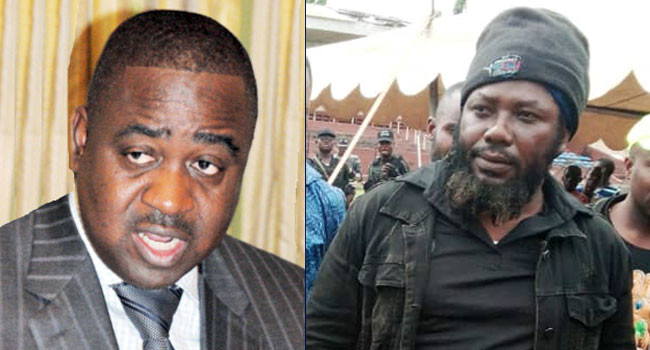 Suswan and Gana
Former Governor of Benue State, Gabriel Suswam has attacked the Nigerian army over the killing of Terwase Akwaza a.k.a Gana, said to be the most wanted criminal in the state.
In a statement released on Wednesday September 9, Suswam stated that security operatives are yet to learn their lesson from the crisis triggered by the killing of Mohammed Yusuf, founder of the Boko Haram sect.
The Benue Senator also backed Governor Ortom on his claim of Gana being ambushed while on his way to surrender. He also disclosed that the killing of the militia leader has heightened tension in the area.
Suswam said;
“The lessons of the Boko Haram escalation after a similar murder of its leader are still here with us. If this method is accepted as a norm in our country, there will be no need for laws and courts.
“We stand to benefit more by subjecting suspects to due process of the law. Information extracted from a living Gana would have helped security agents get to the root of activities of criminals.
“By this gestapo style execution, we have missed an opportunity to learn vital lessons about the structure of crime in the area. Even war criminals captured alive are entitled to certain rights.
“I was totally dumbfounded to learn that while Gana was on his way to Makurdi the state capital to present himself to the State Governor who was waiting, his long convoy that included political leaders, Traditional rulers, clergy men and security agencies was ambushed by allegedly armed soldiers and he isolated and taken away.
“In the midst of the confusion, pictures began to circulate on social media of the bullet ridden body of Gana with a rifle callously placed on his side.
“Our joy was multiplied when we saw him along with his militia surrender arms and publicity renounce a life of crime. Our revered king extracted a pledge from him never to turn his kingdom into a wasteland.
“Those present at this forum heaved a great sigh of relief with the thought that finally, a life full of uncertainty has come to and end.
“This is a time to heal and not war. This is a time to hold each other to our common values as human beings. This is a time to rebuild our fractured society. This is a time to rally together as brothers and say Enough is Enough.”
Top Stories