A DPO in charge of a police station has been apprehended by an irate mob after police reportedly killed 10 protesters. 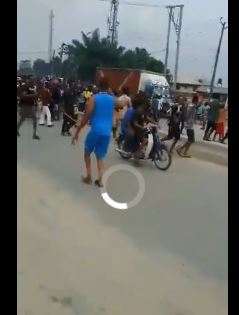 DPO apprehended in Rivers
An angry mob has taken hold of the Divisional Police Officer in charge of Oyibo police station in Rivers state after over 10 protesters were reportedly killed today.
Two police officers have been killed in retaliation after the protesters who were shot dead, according to reports.

Live from Rivers State, as Hundreds of Angry protesters captures DPO of Oyigbo Local Government Police Station alive and parades him on the street. I will update as event unfolds around Rivers State.@TVCconnect#Endsars#unarmed#LekkiGenocide@AishaYesufu @davido pic.twitter.com/jpmQEQCqcX

Oyibo police station has been burnt down, police officers have fled after killing innocent protesters.
Watch video below:
Top Stories