Mr. Babajide Sanwo-Olu, the Governor of Lagos State, has paid visits to some places affected by the chaos in Lagos.

The governor on Friday, visited Local Government Secretariats, Police Stations, and other facilities attacked by hoodlums in the state.

As of the time of filing this report, the governor and his team had visited the Ajeromi Ifelodun Local Government, Ajeromi Divisional Police Headquarters, Layeni, and Amukoko Police Stations.

The PUNCH had reported that the areas and facilities visited were attacked by hoodlums in the state on Monday, Tuesday, and Wednesday.

Speaking during the visit, Lagos State Commissioner for Information, Gbenga Omotoso, said the attacks on public facilities compelled the state government to impose a curfew on the state.

“This is not d kind of Lagos we know and want to know. We should see ourselves as brothers. The kind of rebuilding that we have to do now is great. This is a tough and difficult time for us but we will come out stronger.”

“The governor inspected the burnt vehicles, numbering 86 and looted offices and buildings in the secretariat. He expressed dismay at the actions of the vandals. He empathised with women and children believed to be wives and kinsmen of police officers in the barracks.” a statement from Ajeromi LG Chief Press Secretary, Fakunle Ekundayo, said. 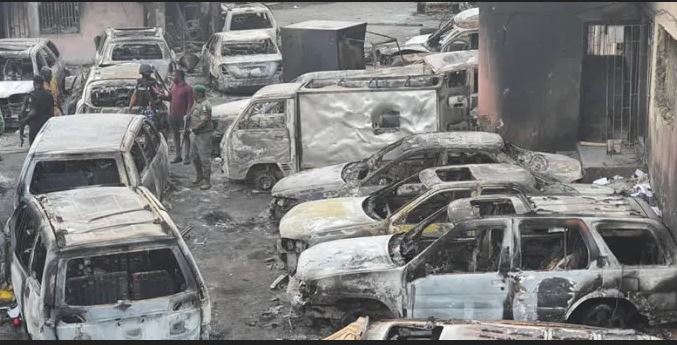