Nigerians have attacked musician, Flavour after he was caught kissing his little daughter. 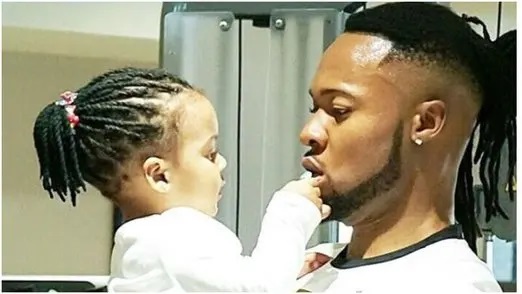 Flavour and his daughter
Singer, Flavour has been criticized after a video of him passionately kissing his little daughter surfaced online.
Many accused him of inapproprate behaviour.
In the video, the singer was seen playing with his daughter and kissing her passionately and making faces like he was deriving pleasure from it.
According to some social media users, giving a little girl a deep kiss like Flavour did, was very wrong, regardless of the fact that she was his daughter.
See some comments below;
@fboygram wrote “Is it okay to kiss your child on the mouth? It can shift the kid’s understanding of personal boundaries…
The lips and the mouth are the personal boundaries of a kid’s body, as psychologist Charlotte Reznick explains. When you kiss a child on the lips, you show them that their body border is open and that someone can intrude into their territory with no problem.”
@bamsfashion_ wrote “Why he look the girl like say he wan fuck am”
@ayoka_johnson wrote “Haa see the look on his face”
@db_fabrics wrote “I won’t be surprised if he’s a low-key paedophile….That look he gave the child is appalling”
@fairskinnedgirlie wrote “Even the way he rubbed her hand….man was horny sha”
@jialoba wrote “This kiss and the after reaction sha???”
@the_real_chinny wrote “I’m not okay with that look at all”
@ruth_adache wrote “Y he looking at like like a pedophile”
@mzaminu wrote “The look . Hmmmm”
Watch video below;