The husband of an actor has been called out after he went into hiding to avoid paying school fees. 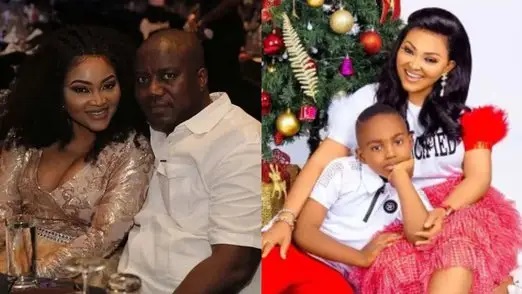 Gentry and Mercy Aigbe
Lanre Gentry, the estranged husband of Nigerian actress, Mercy Aigbe has been slammed on Instagram.
The actress called out her husband on Instagram for allegedly going into hiding because he wants to avoid paying school fees.
According to Mercy, the useless fathers have gone into hiding because it is time for them to pay their children’s school fees.
The mother of two who came across the post about dead beat dads, was very quick to repost it because its obviously what she is going through.
The actress and her husband have been at loggerheads with each other for some time now after he reportedly beat the hell out of her, forcing her to run away from his house to save her life.
The post reads;
“School fees season… Guess the useless people that have gone into hiding again… Got bless all mothers doing it all”,
“Can I have an answer? To the genuinely dead ones we say RIP. To the dead ones living we still say RIP. To the ones dead to their duties, we still say RIP. It’s that time of the year I love to celebrate MOTHERS doing it all 100%. That is why God will keep blessing Y’all. Your labour is never in vain …… I say a very Big Amen Sis”
Reacting to this, Mercy wrote;
“Tell them sis!!!!!!! Awon were! I am so reposting this!” 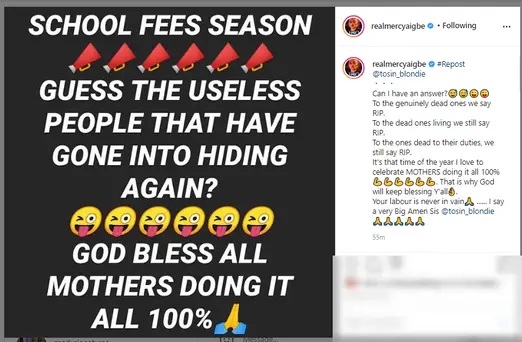 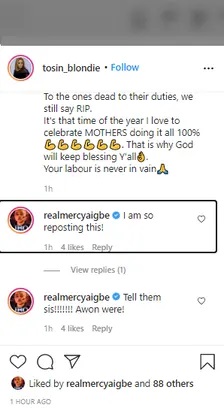