Barrister Udam, who is a Managing Partner at Orkar, Udam and Associates (Attorneys and Legal Consultants), was killed alongside his wife, Nkechi, at Agboughul area of Makurdi on Tuesday night, December 15. 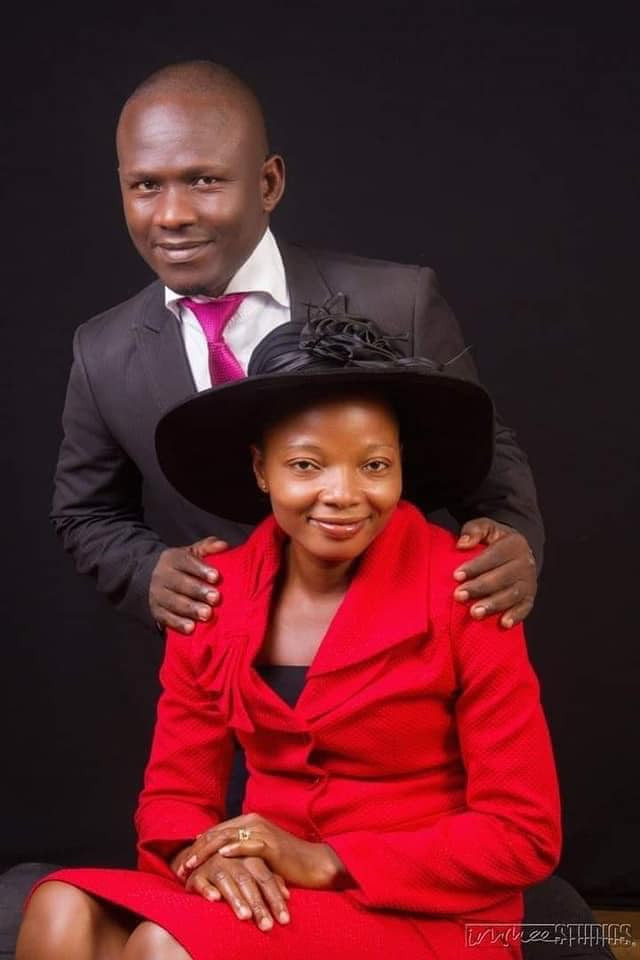 Udam Moses and his wife

Jirgba Terfa Jirgba, a Nigerian Lawyer, has shared his own version of what really transpired during the brutal killing of his senior colleague, Udam Moses and his wife by persosn suspected to be hersmen in Benue state.

It will be recalled that Barrister Udam, who is a Managing Partner at Orkar, Udam and Associates (Attorneys and Legal Consultants), was killed alongside his wife, Nkechi, at Agboughul area of Makurdi on Tuesday night, December 15.

Taking to Facebook on Wednesday, Jirgba narrated what he described as the 'true story of the brutal murder. He also alleged that the herdsmen gang raped Udam's wife, who is said to be few months pregnant.

The early hours of today witnessed the most gruesome murder of my senior colleague and brother, Hon. Barr, Moses Udam, his wife and 3 others. I have taken time to investigate what led to the killings and also to ascertain the true story, since there are several conflicting stories around the incident.

What transpired at Agboughoul, behind Modern Market this morning that left the bodies of my colleague and several others dead is one of the several attacks by the Fulani herdsmen. Udam's residence is located at the western part of Makurdi and is almost the last house towards the Benue River. The place has seen several Fulani herders' attacks in the recent past and has practically been deserted as Fulani herdsmen have continued to lay claim to the vast land that stretches from Agboughol, Kpeifi behind NKST church, Kua to River Benue, where the incident took place.

The place where the incident took place is less than a kilometer to Modern Market, the biggest market in Benue state. Fulani herdsmen who have carried out several attacks on that community in the past this morning were said to have split themselves into two groups during the attack according to a colleague who witnessed the onslaught.

They arrived Agboughol, Kpeifi behind NKST church, Kua at about 11 pm with sophisticated weapons and were heard speaking in Hausa language with a touch of Fulfude accent. One group blocked the famous Kua road that leads to Ortom's farm and the other group stood at Udam's house directly facing Nyiko's compound who is also a victim of the attack. The biggest problem in this area is the lack of access road. The road is practically immotorable and it's very difficult to ply it even with a motorcycle. And to worsen it, there is no single police post in a community that houses over 5 thousand people.

The true story is that Fulani herdsmen arrived the area crossing through River Benue in numbers and camped within the Fadama that stretches from River BENUE to the neighboring houses where our colleague also built his house. Mind you, our colleague's house is the last house that when you pass you won't see any other house till the next big village where herdsmen had slaughtered hundreds of people the other year.

"Their target was to silently pick their victims in their sleep and slaughter them from house to house and leave quietly the next morning without any trace. They began by entering the house of Barrister Moses Udam and one Mr. Nyiko, a blind man who is also a victim of today's attack. When the herdsmen entered Udam's compound which is unfenced, they discovered that the group that went to Mr. Nyiko's house had been spotted by a young man who ran out through the window on sighting them from afar and was already shouting and alerting the public of their presence.

"The herders immediately became apprehensive and started shooting sporadically in order to scare people. They shouted in pidgin English with a thick Hausa accent and demanded that Udam must open his door. But as Udam refused they started shooting at his door until the bullets tore the door apart and they got inside where they fired at him even as he was shielding his wife. They cut his head and followed his wife, raped her in the bathroom and finally killed her with a bullet that went through her head. They also fired a shot at the nanny and cut her in several places and she is currently receiving treatment in the hospital.

"They finally returned to Nyiko's house and killed him with 3 of his grand children and ransacked the whole house, carted away cash and other valuable items and followed the river path to where they used their canoes and crossed into Nasarawa state.

People who saw these killers know that they were Fulani and had come with a mission to eliminate the entire community. Their modus oparandi still remains the same. So to try to give another story is unacceptable. 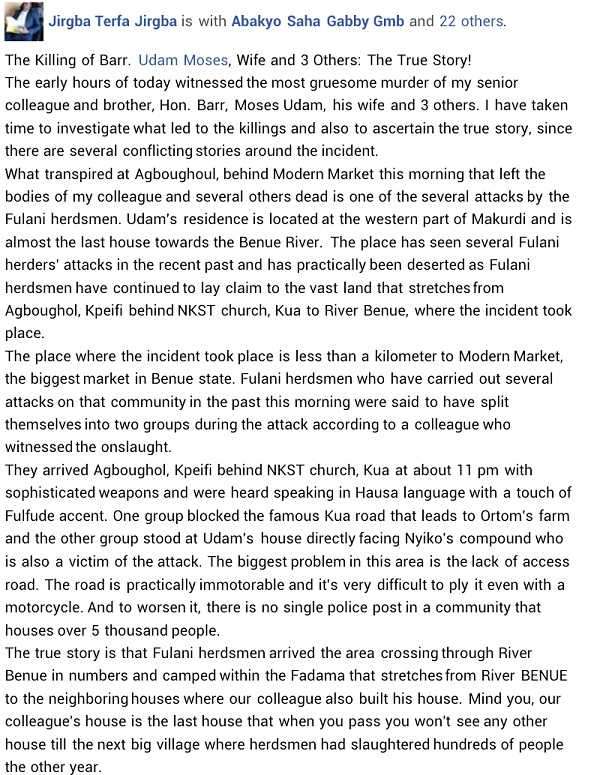