A court in Lagos has sentenced a former managing director of a now defunct bank, Finbank to prison for stealing. 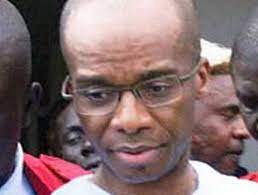 Okey Nwosu
Mr. Okey Nwosu has been convicted by a court for stealing.
The former Managing Director of the defunct Finbank Plc was sentenced by a Lagos High Court on Tuesday for stealing N18bn belonging to the bank.
Nwosu was convicted and alongside three directors of the bank – Dayo Famoroti, Danjuma Ocholi, and Agnes Ebubedike.
But while Famoroti bagged three years’ imprisonment just like Nwosu, Ocholi was sentenced to 12 months in prison, while Ebubedike got six months of community service.
Justice Lateefa Okunnu, who handed down the verdict, also ordered Nwosu and Famoroti to pay back the stolen N18bn in restitution.
The convicts had been arraigned before Justice Okunnu since 2013.
Not long after being arraigned, they went before the Court of Appeal to challenge the validity of the charges, leading to the quashing of the charges by the appellate court on November 21, 2013.
Displeased with the decision of the Court of Appeal, the Economic and Financial Crimes Commission headed for the Supreme Court, which restored the charges against the defendants and ordered them to return to the high court for their trial.
In her judgment on Tuesday, Justice Okunnu held that the EFCC proved the charges against the convicts beyond a reasonable doubt.
Top Stories