The rapper also revealed she has other bones in her house, including the skull of a child which she claims to have bought from a scientific research website. 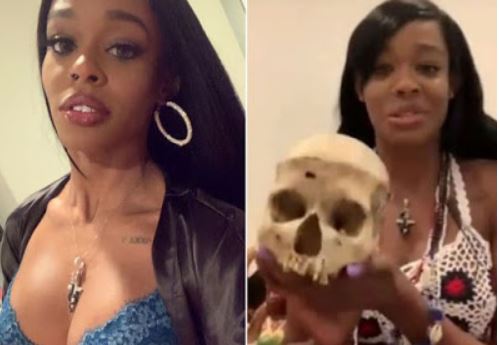 Days after she shared a video boiling her dead cat, controversial rapper, Azealia Banks has shared another outrageous claim suggesting she has the skull of a six-year-old girl in her home.

The rapper made her latest wild statement during an appearance on Australian radio's The Kyle and Jackie O Show.

During the chat, she appeared on video link as she spoke to hosts Kyle Sandilands and Jackie O and held up an item that looked like a human skull.

She was explaining her fascination with bones and taxidermy after recently shocking fans by digging up her dead cat.

Azealia, 29, explained she wanted to preserve her cat's skull as a tribute to her late pet.

She also told the hosts she has other bones in her house, including the skull of a child which she claims to have bought from a scientific research website.

Putting to bed wild rumours about why she dug up her dead cat, she said: "I didn't eat the cat. I would not eat a cat that's been dead for three months.

"That's part of taxidermy. I don't know what you think happens when you go to a medical school and you see a full skull or skeleton, that's what happens."

She then held up a skull in front of the camera and told the stunned hosts: "There are lots of scientific research sites where you can buy human skulls like this one...

"I love bones. I respect the afterlife... I think that the bone is where the energy holds in a person, and with my cat. It didn't feel right when he got sick [to have him cremated by the vet]..."