Tragedy As Teenage Boys Rape 36-year-old Woman, Beat Her to Death In A Park (Photo)


A woman has died a sad death after being sexually assaulted by two teenage boys at a park. 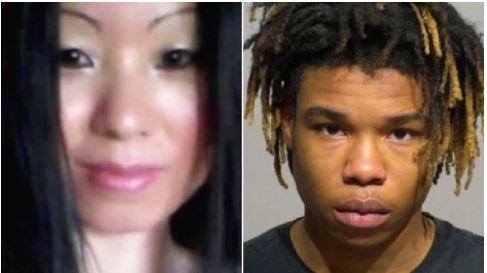 The woman was beaten to death by the boys who sexually assaulted him
Policemen in the United States of America have arrested two teenage boys for the brutal murder and rape of a 36-year-old woman.
It was gathered that the boys after forcing themselves on the woman, beat her to death.
Ee Lee, 36, was relaxing in a park when the teens dragged her under a tree, stripped and abused her in a sickening assault that was filmed in the killers' cell phones, prosecutors say.
Kamare Lewis, 17, and Kevin Spencer, 15, each face one count of first-degree intentional homicide, as party to a crime, and one count of first-degree sexual assault
The victim was reportedly found half-naked and barely breathing at Washington Library Park in Milwaukee, Wisconsin, on September 16, 2020, after a brutal physical and sexual attack.
Investigators say footage from the area shows a group of 11 people exiting the park on foot and on bicycles, one being Lewis.
After the terrifying ordeal, Lee died days later in hospital due to blunt force trauma to her head.
One of the alleged "bystanders" who called 911 was actually an associate of Lewis and Spencer, who had been seen walking with them, according to the criminal complaint.
Prosecutors say the witness then offered up a "detailed statement" on the two teens, explaining they had beat Lee and forced her to perform sex acts.
The witness also claimed to have seen video footage on Lewis' phone, showing the pair hitting Lee as she lay on the ground.
Another onlooker who found the body described Lewis "hitting her with tree branches and punching her in the face," as Spencer also struck her.
He then claimed, "Spencer told Kamare to put her in the water and Kamare was dragging her to the water," after they ceased beating Lee.
He also alleged that footage of the incident, recorded by Lewis, was sent to him via Facebook Messenger before he deleted the content from his phone.
Months later, the witness' mother told cops that there was further footage they may be interested in on her son's old iPhone.
His mom said a video showed "two boys beating a lady," with "a lot of other little kids standing around."
She said "you could tell who they were," and explained she originally told her son to delete the video "because it doesn't have anything to do with him," before warning him to "stay away from Kamare Lewis."
The DNA of the defendants was found on Lee's body and her denim jacket
Another male whose DNA was found on a bottle at the scene told investigators Lewis and Spencer approached her to see if she had any money.
"They saw this lady on a blanket in the park..." and "walked up to her to see if she had any money, and started harassing her," he told authorities.
He said they then began hitting and kicking her, before dragging her to an area near a tree to assault her further.
The witness told the others he "didn't want to be involved and started walking away," resulting in him being hit by a juice bottle thrown by one of the teenagers.
Spencer confessed to him that he and Lewis had beat and raped Lee, but both defendants gave different accounts of the attack.
Kamare Lewis, 17, is facing homicide charges alongside Kevin Spencer, 15
Lewis "tried to downplay his role in the incident" and told investigators that Spencer and others did most of the beating.
The complaint says he "incredibly" claimed Lee "volunteered to have sex with the defendant and others present," before others crowded around and began hitting her.
Lewis said his 15-year-old accomplice "was the most aggressive" and he continued to strike Lee "more brutally" as people gathered.
Prosecutors say Lewis admitted to beating, sexually assaulting, and leaving Lee for dead near a pond without attempting to get her help.
He indicated he thought Lee was already dead and said he "didn't really care about her because she's not someone he knows personally."
Both of the teens' DNA was found on Lee's body and her denim jacket, according to the criminal complaint.
Bail was set at $300,000 for Spencer and $275,000 for Lewis.
"I don't have confidence Mr. Spencer will return to court and my bail amount reflects that," said Milwaukee County Circuit Court Judge Audrey Skwierawski.
If convicted, they face up to 60 years in prison.
Top Stories