As of the time of filing this report, the whereabouts of the team’s driver remains unknown, after he was taken away by the unknown gunmen. 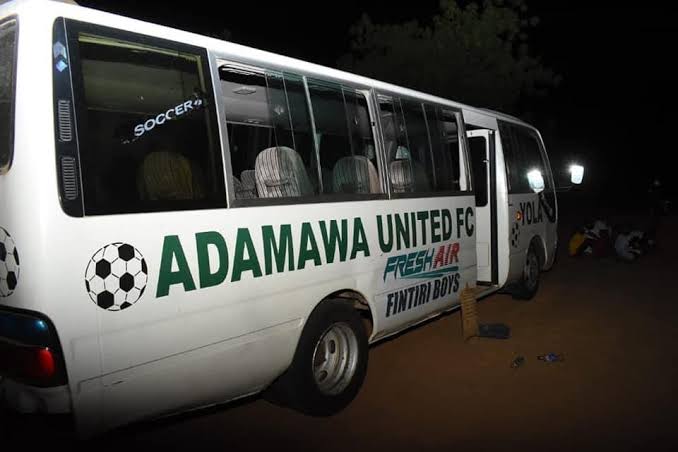 The players and officials of Nigeria Professional Football League side, Adamawa United, have been attacked by gunmen, The PUNCH reports.

They were attacked by gunmen around Benin-Ore Expressway on Friday night.

The incident happened about 11.45pm, on their way to Lagos for an NPFL clash versus MFM FC.

As of the time of filing this report, the whereabouts of the team’s driver remains unknown, after he was taken away by the unknown gunmen.

Adamawa were to face MFM in their week 11 NPFL fixture at the Agege Stadium, Lagos.

Our correspondent learnt the players’ phones, money and other valuable items were taken away by the gunmen.

Earlier this week, Wikki Tourists bus got burnt while travelling to Uyo, Akwa Ibom for their NPFL tie with Dakkada FC.

Players and officials of NPFL clubs have had nightmarish moments while travelling for games across the country following the poor state of security in the country in recent years.

Due to the economic issues in Nigeria, clubs have been forced to make longer and more treacherous journeys by road in order to reduce costs.

In 2015, five Kano Pillars players were shot while travelling to Owerri.

There was a similar incident less than a year later, as another Premier League team Enyimba’s bus was attacked on their way for a pre-season tournament.

Gunmen also attacked members of IfeanyiUbah FC in Kogi November 29, 2019, while on their way to Kano for a League clash versus Pillars.

The gunmen reportedly opened fire on the team bus, with the bus driver and a player sustaining injuries.