Lady And Her Lover Caught During Robbery Operation, AK-47 And Locally Made Pistols Recovered (Video)


Policemen in Abia state have arrested a woman and her lover during robbery operation. 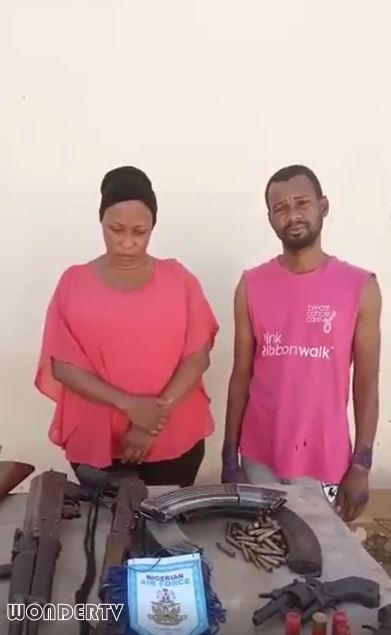 The lady and her lover, Ikechukwu John caught during robbery operation
Security operatives have nabbed a woman and her lover during robbery operation in Abia state.
According to WonderTV media, the young woman and her lover Ikechukwu John from Ohafia in Abia state were nabbed by the security operatives during a robbery and kidnap operations.
Items recovered from them are 3 AK47, 3 locally made pistols, magazines and ammunition.
According to Ikechukwu John, he is a car dealer and he sells both stolen and genuine cars. He confessed that the guns in which he uses for operations were given to him by a friend who is currently serving time in prison.
Luck ran out of them after they snatched a car and held the car owner hostage.
WonderTV gathered that the young woman and her lover have been snatching people's cars and kidnapping them as well.
The woman when interviewed said they rented an apartment to keep their victims because they were tired of spending money keeping them in hotels. She said she knows what They did is wrong but because she loves Ikechukwu, she couldn't tell him to stop the crime.
Click the link below to watch the video:
Top Stories