The couple allegedly steals bottles of different wines from various supermarkets by swapping them with fake and adulterated ones. 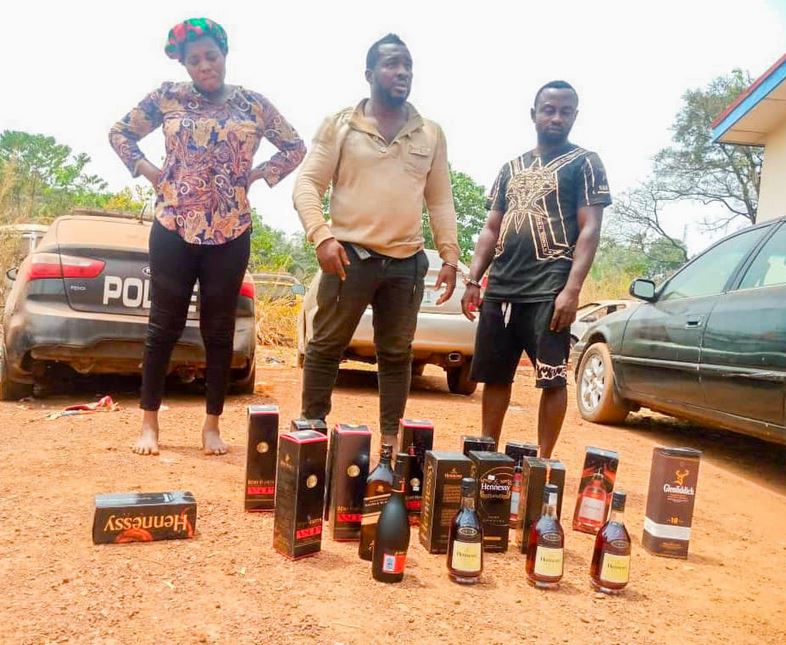 The Couple and their accomplice

A couple identified as Chinedu Ibekwe and Blessing Ibekwe alongside their accomplice have been arrested by operatives of the Enugu State Police Command for stealing and adulteration of beverages.

Spokesperson of the command, ASP Daniel Ndukwe, who confirmed the arrest in a statement on Thursday, February 25, said the couple allegedly steals bottles of different wines from various supermarkets by swapping them with fake and adulterated ones.

"On 11/2/2021 at about 1500hrs, Operatives attached to Abakpa Police Division arrested one Chinedu Ibekwe (m) aged 36 and his wife Blessing Ibekwe aged 26, both of Ndiagu-Amaechi, Awkunanaw, Enugu," the statement reads.

"Their arrest was due to a report received that the duo stole bottles of different brands of wine valued at One Hundred and Seventy Thousand Naira (N170,000.00) at LSG Supermarket in Abakpa-Nike Enugu, by unsuspectingly swapping them with fake and adulterated ones they brought in their car, after claiming that bank transfer payment they initiated on their bank's mobile application platform failed."

Ndukwe said, "preliminary investigation shows that they confessed to the crime and led the Operatives to the arrest of one Onyinye Nebo (m) aged 38, of Amagugu Road, Amaechi Awkunanaw, Enugu, alleged to be the producer of the suspected fake and adulterated bottles of different brands of wine they used in stealing the original products as revealed in different supermarkets within Enugu City.

"Fifteen (15) bottles of the suspected fake and adulterated brands of wine, including Hennessy (7 bottles), Remy Martins (4 bottles), Glenfiddich (1 bottle) and Johnny Walker Double Black (1 bottle) as well as a Toyota Camry 2.4 Model car with Registration No.: AGL 181 FR; they used for the criminal operations were recovered."

The suspects will be charged to court upon completion of investigation.