The lawyer said this after the arrest of Yakasai by the Department of State Services shortly after criticising the President on Twitter. 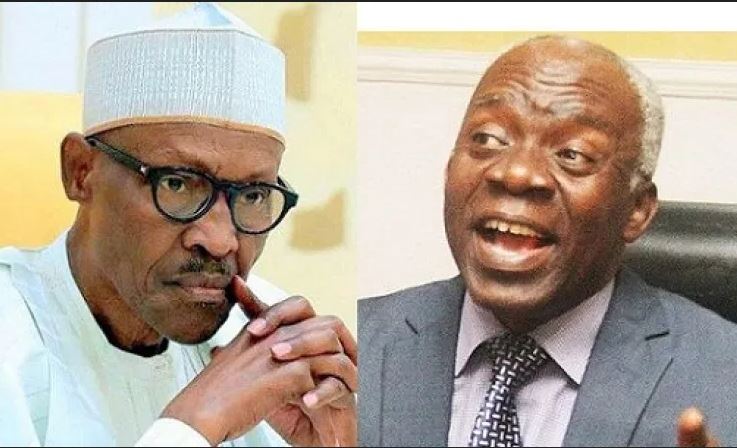 Femi Falana (SAN), an activist and human rights lawyer has called for the release of Salisu Tanko-Yakassai, while stating that President Buhari was not subjected to any form of intimidation when he called for the resignation of former President Jonathan.

Recall that Yakasai was arrested by the Department of State Services shortly after criticising the President on Twitter.

Falana, who is the Interim Chairman, Alliance on Surviving Covid 19 and Beyond, said this in a statement on Sunday titled, ‘Asking Buhari to Resign is Not An Offence’.

The senior advocate said retired military officers and political party leaders including chieftains of the All Progressive Congress have repeatedly asked Buhari to call it quits due to the worsening insecurity in the country and there is no justification for the arrest and detention of Yakassai.

He noted that in the National Assembly, there had been calls by legislators for Buhari’s resignation or impeachment on the grounds that criminal gangs have taken over the monopoly of violence in the country.

Falana said, since such concerned citizens were never arrested, the harassment of Yakassai is high handed, discriminatory and illegal.

The statement read in part,

“It is on record that the APC and its leaders including General Buhari; National Leader, Bola Tinubu; Malam Nasir El-rufai and Alhaji Lai Mohammed repeatedly called for former President Goodluck Jonathan’s resignation between 2013 and 2014 yet they were never subjected to any form of intimidation for exercising their freedom of expression at the material time.

“Since the call for President Buhari’s resignation is likely to continue to be made by other concerned individuals and groups over the virtual collapse of the security architecture of the neo-colonial state it is pertinent to draw the attention of the State Security Service to the case of Arthur Nwankwo v the State 1985 6 NCLR 228 where the Court of Appeal charged the Nigerian people to engage in relentless criticism of democratically elected governments.

“In particular, Olajide Olatawura JCA (as he then was of blessed memory) had this to say: The decision of the founding fathers of the present constitution which guarantees freedom of speech which must include freedom to criticise should be praised and any attempt to derogate from it except as provided by the constitution must be resisted.”

The ASCAB chairman called for the immediate and unconditional release of Yakassai from illegal custody.