Security operatives in Osun state have apprehended a musician and 10 others for fraud and armed robbery. 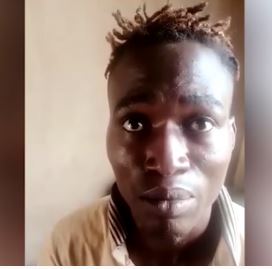 Ayoola Olalekan
A Nigerian musician identified as Ayoola Olalekan has been paraded for fraud.
He was paraded alongside 10 others on Monday by Osun state Commissioner of Police, Wale Olokode.
The other charges include: armed robbery, advanced free fraud and possession of stolen items.
Olalekan, whose video where he explained how he could use SIM card and bank details of people to steal money from their accounts, had gone viral, was paraded alongside six others, including his brother, Tunde Adeniyi, for armed robbery and conspiracy.
The CP explained that the gang which included Taye Fala, Azeez Dauda, Adewusi Sola, Abdullahi Adesokan, Moshood Yusuf invaded a house in the Ilesha Garage area, Osogbo. and carted away items worth over N3.6m.
He said, “They also stole one unregistered Toyota Camry, 2007 model, valued N2,800,000. Upon the receipt of the case, the operative from Police Response Unit swung into action and arrested the suspects in Oyo, Lagos and Ogun states.
“One of those arrested, Ayoola Olalekan, said he only assisted them to transfer funds untraceably from victims account and that he is fully aware of their robbery operations.”
Olalekan, who said he dropped out of secondary school in Senior Secondary School 2 in Oyo state, added that his area of specialisation was stealing money from bank customers’ account.
According to him, Tunde Adeniyi, who was also arrested alongside the gang, is his younger brother and an apprentice under him.
Also paraded were Oyedele Timothy apprehended in llesa with a stolen Toyota Corolla and Adewale Adetona,  who allegedly produced master keys for him.
Top Stories