A lady has revealed how she found out that the person she thought was her elder sister is actually her mother. 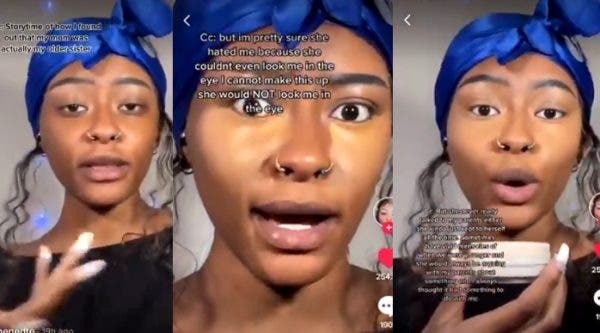 The lady revealed the story in a video
A lady has been left shellshocked after discovering that the person she called sister is actually her real mother.
In her narration in a video which has since gone viral, the lady spoke on how her ‘sister’ was sexually assaulted by their father when she was just 10 years old.
According to her, when her elder sister turned 18, she left the house and after some years apart, her sister was able to locate her on social media.
She got in touch and they linked up, that was when the sister told her that when she was very little their dad took advantage of her, she became pregnant and gave birth to the lady who they all refer to as her sister.
After knowing the truth about her real mother, she then confronted her parents and they said it was kept a secret in order not to embarrass the family because they have some traditional values which needed to be upheld.
However, she then asked for permission to go stay with her older sister, when she was allowed, she and her sister then did DNA test and it was confirmed that she was the mum.
On getting the confirmation, they reported the case to the police and her their dad was arrested and jailed.
Watch the video below:
Top Stories