The suspect had substances suspected to be Indian hemp and high-grade s3x toys to be used on the girl in a hotel before he was arrested. 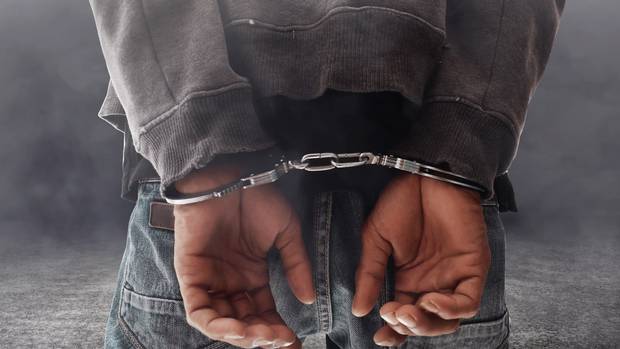 A man identified as Obinna Benson has been arrested by the police in Cross-Rivers after he was seen with a bag containing sex toys, handcuffs, substances suspected to be Indian hemp and other unidentified items.

Parading the suspects, the Commissioner of Police, CP Sikiru Akande regretted the action of the man who is in his 30s and said, “It was an incident that somebody came all the way from Lagos with a bag full of sex toys to lure one of our female students into a hotel room."

The CP said that the suspect had substances suspected to be Indian hemp, high grade to be used on the girl in the hotel, but luck ran out of him when the management of the hotel got wind of what was happening and called the police that responded quickly.

“We don’t know, and we are still investigating the hazard this suspect would have done to our kids especially during this period, but we are lucky to have been able to have him arrested,” he stated.

According to the Commissioner, another incident that bothers him was the activities of the traditional rulers in Calabar South Local Government Area of the State.

“Another thing that is bothering us now is that the elders who are supposed to have helped us are busy engaging in squabbles that are not necessary.

“Traditional issues that are lingering are being brought to the fore, and we have told them in clear terms that anybody that is going to do anything that is going to bring problem to the state, we shall deal decisively with such people.

“Some people have accused the police of shutting down the Etubom’s Council Secretariat. It is not our making, the number of petitions and counter petitions that are coming are over hundred and as responsible people, we will not fold our arms and see such situation degenerating into crisis. Anybody who has an issue, should go to court, ”he advised.

Interestingly, when DAILY POST sought to speak with the suspect who was arrested with sex toys and other items, he said his girlfriend liked what he was doing and that those items were used by two of them, denying any wrongdoing.

“My name is Obina Benson, I am here as a suspect in assault sexual case, those items; I bought them, my girlfriend likes them and are used by two of us, the items are rechargeable, They don’t last,” he revealed.

It Wasn't A Prank, We Thought She Died - DJ Michelle's Sister Opens Up After Her Rescue
Popular Stories