Osinbajo spoke shortly after he decorated Baba with his new rank at the Presidential Villa, Abuja. 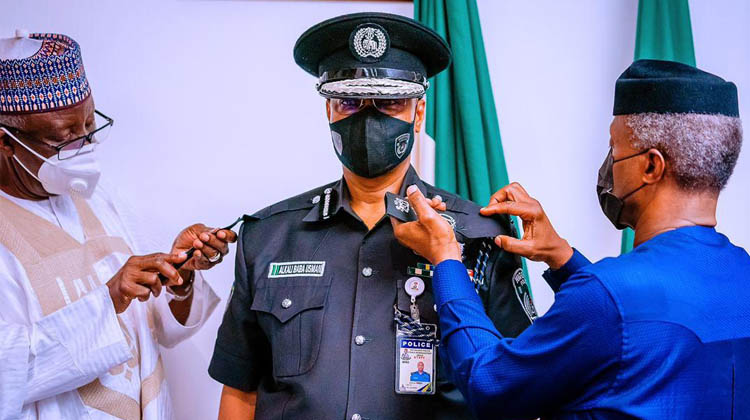 Professor Yemi Osinbajo, the Vice-President of Nigeria on Wednesday reminded the acting Inspector-General of Police, Usman Baba, that he is assuming office at a turbulent time, hence the need for him to hit the ground running, The PUNCH reports.

Osinbajo spoke shortly after he decorated Baba with his new rank at the Presidential Villa, Abuja.

He said, “You are assuming office at a very turbulent time in the life of our people. There are multiple threats to law, order and public safety.

“The role of law enforcement agencies, particularly that of the police force as primary agency charged with maintaining law and order, has never been more important.

“The police force is our institution of first resort, the first line of defence against crime and anarchy and the first sign of the strength of the state.”

Osinbajo told the new IGP that the challenges before him would test his mettle, adding that the organisation he is leading is in itself facing several challenges.

He noted that policemen still work in extremely difficult condition while some face the threat of physical harm by terrorists and hostile non-state actors while in the line of duty.

In a brief interview with State House correspondents, Baba admitted that he came on board at a challenging time.

He however promised to improve on the performance of his predecessor.

He said while the police management team led by Adamu tried its best, there was still a need for improvement.

“I have been a member of the management team. We have tried to do our best, but it’s not enough. There is room for improvement.”

On equipment and manpower, he said the force has the President’s support and he expressed the hope of getting more of what has been requested through the Police Trust Fund quickly.

He added, “Nigerians should expect improvement in the security situation.

“Nigerians should also collaborate and cooperate with us. With all the inadequacies we have, we still require everybody to be part of policing in this country.