Lindstrom who is also the mother of DMX’s 15th child, got the tattoo to pay tribute to the rapper. 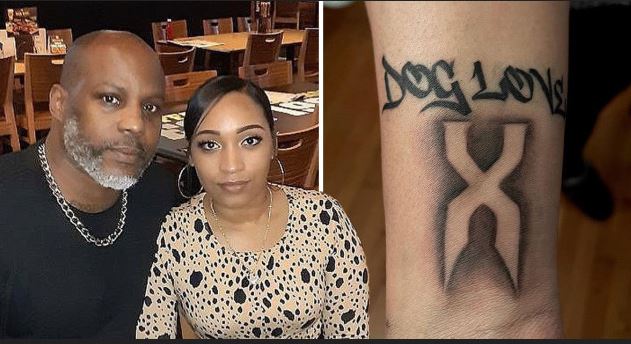 Desireé Lindstrom, the fiancee of late rapper, DMX has gotten a tattoo in honour of the rapper who died last week Friday due to an overdose.

The tattoo features the writings: “Dog love” and a large letter “X”.

Dog love is the title of a song by DMX which was released in 2006 and it represents his love for dogs, while the X imitates the cursive lettering in DMX’s nickname.

Lindstrom who is also the mother of DMX’s 15th child, got the tattoo inked by famous New York tattoo artist, Krystal Kills of Black ink crew.

The tattoo artist who posted the picture on her Instagram page, paid homage to the late rapper while sending words of comfort to Lindstrom.

“I feel honoured to be able to do this memorial but also saddened. Your light was unmatchable. @desi123love I pray you find your way through these dark times and remember the love you had for each other will forever be untethered. I’m glad I got to witness it. The world lost an icon but also a great father. Praying for your family. REST IN POWER DMX,” she wrote in the caption section.

According to medical reports, the rapper’s death which occurred on April 9, 2021, was a result of a drug overdose that left him in a vegetative state for six days.