NAFDAC, explained in a statement that the truck was intercepted along Asaba–Benin road by officers of the Agency’s Investigation and Enforcement (I&E) Directorate following an intelligence report. 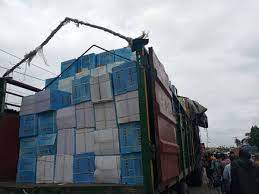 According to a report by Sun News, a Mercedes truck laden which was filled with banned and unregistered medicinal products has been intercepted.

It was intercepted by the officials of National Agency for Food and Drug Administration and Control (NAFDAC) in Asaba, Delta State.

NAFDAC, explained in a statement that the truck was intercepted along Asaba–Benin road by officers of the Agency’s Investigation and Enforcement (I&E) Directorate following an intelligence report.

Its Director General, Prof. Mojisola Adeyeye, in the statement which was signed by NAFDAC’s resident media consultant, Sayo Akintola, reiterated the Agency’s resolve to ensure that only wholesome medicinal products and other regulated products are available in the markets for public use and consumption.

She said that after thorough screening of the products, the truck was found to contain, among other products, improperly stored tetanus diphtheria vaccine, and various unregistered, banned and controlled medicinal products, including analgin injection, CSP with codeine cough syrup, mepacrine HCL tablets, diethylcarbamazine citrate tablets, dano tetanus vaccine, artestunate injection, and many others.

She further explained that the products were evacuated and inventory taken while the suspects with cartons containing the products made police statements but they were released on administrative bail.

According to the NAFDAC boss, further investigations revealed that the intercepted truck was conveying the products from bridge head drug market in Onitsha, Anambra State, to retailers in Warri, Delta State.

Prof. Adeyeye, therefore, warned drug merchants to always have the wellbeing of Nigerians at heart over and above any other pecuniary consideration, stressing that there’s no hiding place for anyone that deals with illicit business of circulating dangerous medicinal products that are capable of compromising the health of the Nigerian public.