In a Twitter post on Wednesday, Chuba dared Omojuwa to show evidence of where Oby gave consent to be a director in Omojuwa's PR company. 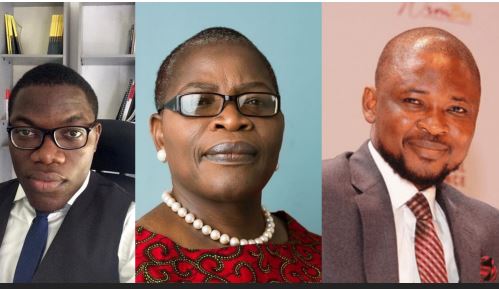 In a Twitter post on Wednesday, Chuba dared Omojuwa to show evidence of where Oby gave consent to be a director in Omojuwa's PR company.

He wrote, “It’s fascinating watching you @Omojuwa do your best to avoid taking responsibility.

“You’ve still not shown any document that indicates she signed or gave you any consent. You took @obyezeks name & tried to use it for your gain & lied when it came out.

“You can try to obfuscate with all these shalaye you’ve done @omojuwa, but you’re yet to do this simple task - show evidence that she gave you consent and that she was aware you made her a director in your company. It’s that simple - show us all your evidence.

“There have been many like you @omojuwa over the years who have thought they could use mom’s kindness and love for Nigeria to profit. You all think you got away with it, but we can assure you that this isn’t how the story ends.

“I’m grateful for the actions you’ve taken so far because it will be to our benefit. You will be an example to others that no one ever bullies the Ezekwesili family. No one. Hi @omojuwa. You can block me, but you can’t block @officialEFCC.”

Omojuwa has been in the news since a report by Buzzfeed and the Digital Africa Research Lab (DigiAfricaLab) exposed how some Nigerian Twitter influencers, including a public relations firm owned by Omojuwa and other organisations, ran a campaign in support of Alex Saab, an alleged money launderer for the Nicolas Maduro-led Venezuelan government, who is currently fighting extradition to the United States from Cape Verde.

BuzzFeed had reported that employees of the PR company run by Omojuwa got paid to promote a social media campaign for the release of Saab, in Cape Verde.

There were also allegations that Oby was one of Alpha Reach Limited co-owners.

But in his April 9, 2021 statement on the matter, Omojuwa maintained that “Alpha Reach, as an organisation, was not involved in the campaign making the rounds,” even as he added that Mrs Ezekwesili had never been a part-owner of the firm.

Oby had threatened to sue the social media influencer for unauthorised use of her name as a director of the company without her consent.

The former minister had, through the law firm of Femi Falana and Co., written to Omojuwa, saying she was shocked to learn of her status as a director of the company when contacted by BuzzFeed.

She denied her involvement in the company, although checks with NG-Check.com, a platform that provides information on Nigerian companies, listed her alongside the Governor of Kaduna, Nasir El-Rufai, as one of the company’s directors.

Ezekwezili had demanded, through her lawyers, an apology and full disclosure of the records of Alpha Reach, from Omojuwa.

But on Wednesday, Omojuwa broke his silence over the issue.

In the four-page letter dated April 14, 2021, which was written on his behalf by a law firm, Babalakin & Co, Omojuwa said the former education minister was a director of the firm and that her consent was sought and obtained before listing her as one of the company’s directors in 2012.

“The company was indeed registered in 2012; our client however unequivocally denies your allegations that consent of your client was not sought before she was listed as a Director. Our client sought and obtained your client’s consent before listing her as a Director of the company, based on their close relationship, which you curiously omitted to mention in your letter,” the reply read in part.

Omojuwa, however, did not indicate if Oby signed any document to be made a director of the company, but went on to dwell on what he described as his “basis upon which our client sought and obtained your client’s consent.”

“In the interest of completeness and the full disclosure that you requested in your letter, we have set below the basis upon which our client sought and obtained your client’s consent to be listed as a Director of the company, to begin with,” the blogger stated in the letter addressed to Falana & Falana’s Chambers."

Omojuwa’s legal team also chronicled how the relationship between the duo went south as a result of the alleged refusal of the latter to play by his former benefactor’s playbook on and off social media.

Omojuwa, however, said he would not share the records of the company requested by Oby's lawyers until she signed an undertaking not to make them public.

He threatened to use every piece of information at his disposal to defend himself in the future.