It was gathered from some of the inmates of the camp that the marauders came shooting sporadically and butchering anyone they caught up with. 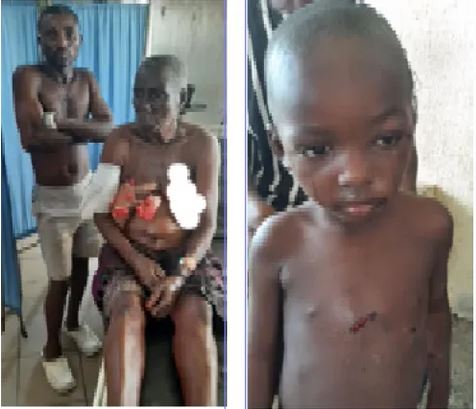 Vanguard reports that it was all tears at the Abagena Internally Displaced Persons, IDPs, camp located on the fringes of the city centre less than five kilometres from the heart of Makurdi the Benue State capital, when suspected herdsmen militia invaded the camp at the wee hours of Tuesday killing seven of the traumatised IDPs and injuring many others.

The unprovoked attack on the camp housing over 21,000 IDPs within the facility and the expansive host community, was obviously unexpected as nobody had ever imagined that the armed herders could be that wicked and inhuman to invade an IDPs camp.

It was gathered from some of the inmates of the camp that the marauders came shooting sporadically and butchering anyone they caught up with.

Reliving the attack, one of the IDPs, David Averse, who accompanied his sons to the Benue State University Teaching Hospital, BSUTH, said he lost a son while another, three-year-old sustained bullet wounds on his leg and hand, and the third, a five-year-old suffered minor injuries.

He stated that the invaders took over the camp and the host community that had provided safe haven for larger portion of the IDPs without resistance between 12am and 2am shooting sporadically, hacking and butchering their victims who couldn’t escape.

“The armed Fulani men stormed Abagena Camp and started shooting, probably knowing that almost everyone inside the camp and in the host community are IDPs.

They shot at anyone they saw, killing seven of us, while many others sustained injuries. Being one of the safest camps because of its proximity to Makurdi Town, most of the displaced persons preferred the camp and no one saw this coming.

“While the shooting was going on everyone scampered. It was like the world was coming to an end. We didn’t even know where the children were. All we could hear were their cries. At that point many never thought of the children, we were all running in different directions not knowing where to run to because nobody was sure of where the invaders were firing from. In fact it was like hell was let loose on us.”

Another survivor, an 80-year-old mama Ngor, who sustained injuries on her chest and hand, speaking through an interpreter, said she could not run but was lucky to have survived the attack. “It is believed that the camp is safer than any other one.

Unfortunately, nobody knew that this can happen right here in Makurdi. Even if they have succeeded in killing us all, they will not kill our spirits,” octogenarian said as she groaned.

Another lady, probably in her early 50s, who lay motionless on a stretcher and could not hold back her emotions, said that the attack was unprovoked. Piqued by the development, which sparked outrage across the state, the IDPs took over the busy Makurdi-Lafia Road where they made bonfire and spread the corpses on the highway, halting all vehicular movements and threatening to stage a reprisal.

Among the first callers to the camp for on-the-spot assessment and to calm frayed nerves, was Governor Samuel Ortom, who could not hold back tears as he addressed the angry IDPs. The governor called on President Muhammadu Buhari to live up to his responsibilities of protecting Nigerians, describing the attack as inhuman, barbaric and unacceptable.

The governor, who called for urgent action against activities of militia herdsmen across the country, said if the Federal Government had taken the issue of militia herders seriously, it wouldn’t have escalated to this level.

He lamented that in the last two weeks, no fewer than 70 persons had been killed in Makurdi, Guma and Gwer West local government areas, while various communities across Benue were suffering from the same murderous militia herdsmen.

Reacting, the Executive Secretary of the State Emergency Management Agency, SEMA, Dr. Emmanuel Shior, said: “I jumped out of my bed and we contacted security agencies and moved to the place. But unfortunately before we got to that place, the attackers had already slain their victims. Seven of them were killed. Six died on the spot, while one died in the hospital.”

Benue State Deputy Governor, Mr. Benson Abounu, who visited the injured at the Benue State University Teaching Hospital, BSUTH, disclosed that among the nine injured in the attack were two children of three years, stressing that they were responding to treatment.

He said: “Nine of the victims who are receiving treatment have been stabilised. Though there is one that is most likely to lose her wrist because of the cut. It’s just hanging there. The doctors are trying to see if the veins are alive and if it could be reattached.

“We have two children of three years old, one shot at his buttocks and the other shot at his hand and leg. That is the situation we have found ourselves. These were people who were chased from their lands and government created a camp with all the inconveniences to keep them for some time pending when there will be normalcy and they will return home.”

Touching his throat, the deputy governor said: “Look, I think it has reached us here. This cannot be tolerated any longer. The law enforcement agencies must beef up and live up to their responsibilities. We cannot tolerate this any longer. Their leaders (Fulanis) must speak with them.

“Something has to be done and by the highest authorities. Enough is enough. These invaders have leaders and it is important that their leaders talk to them. No matter the situation, let them sheath their swords. With what happened today, if the invaders can come to Makurdi to kill with ease inmates of displaced camps, then I want to say that they have brought war to the very doorstep Benue State and this will not be accepted and should never be tolerated by any responsible group of people.”