In a video making the rounds online, the young man believed to be acting under the influence of drugs is seen handcuffed while sitting in the back of a red car. 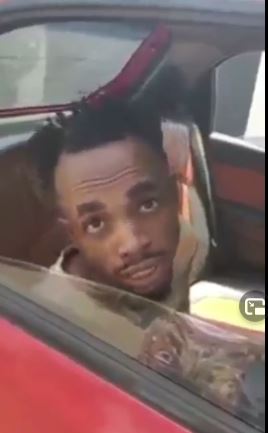 A video has surfaced online showing the moment a Nigerian man in Ghana was handed over to Nigerians to provide help to him after he was found roaming around and acting in an unusual manner.

In a video, the young man believed to be acting under the influence of drugs, is seen handcuffed while sitting in the back of a red car.

Good Samaritans, who are Nigerians, are heard suggesting taking him to a psychiatric hospital.

As the Nigerians tried to get information from him to help him, his answers were erratic and lacked coherence.

"Okay, send me to court, I want to go and bring my father back to life. They killed him without my permission," Nonso is heard saying in the video.

The Nigerians who he was handed over to then said: "This is one of our brothers. They brought him here in the Palace this afternoon. The guy is going mad.

"Some great, wonderful Ghanaians met him on the street and they picked him up, and one of our police brothers rescued him and brought him here into the Palace, so that he will be taken care of."

But the boy said they were lying.

The men with him said they were getting ready to take him to a psychiatric hospital.

They showed the bag of weed they found in his possession and the young man admitted he smokes "weed and cocaine."

"Anywhere you take me, if it's grave, put enough igbo let me die with it," the young man added.

The video was shared to Nigerian online platforms so that the young man can get the necessary support.

Meanwhile, some have suggested that the man is pretending to avoid jail.