In a statement, the Nigerian Air Force confirmed that there was an accident involving one of its aircraft in Kaduna but did not go into details. 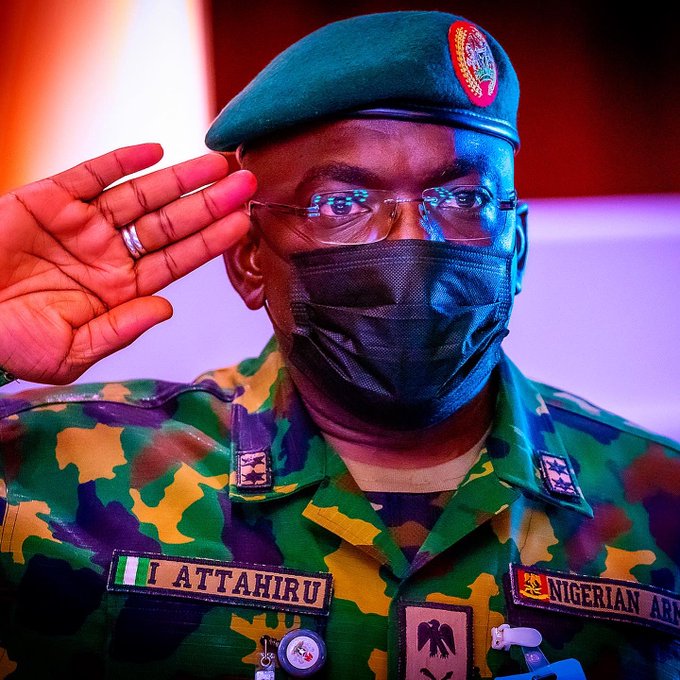 Many Nigerians who are  still in a state of shock, are currently mourning over reports that General Ibrahim Attahiru, the Chief of Army Staff died in a plane crash.

Attahiru reportedly died in a military plane crash which occurred in Kaduna.

In a statement, the Nigerian Air Force confirmed that there was an accident involving one of its aircraft in Kaduna but did not go into details.

“An air crash involving a @NigAirForce aircraft occurred this evening near the Kaduna International Airport. The immediate cause of the crash is still being ascertained. More details to follow soon,” read the statement signed by Edward Gabkwet, the force’s Director of Public Relations and Information.

Details of the incident are still sketchy but SaharaReporters learnt from a military source that there was no survivor in the crash that occurred on Friday.

Nigerians on Twitter have reacted to the report expressing sadness over the death, stating that the late Chief of Army Staff showed readiness to work.

Another user, @shelleofficial tweeted, “Chief of Army Staff (COAS) Attahiru Ibrahim dies in plane crash 24hrs after Abubakar Shekau was reportedly killed by ISWAP. The crash should be investigated, let us know if it was sabotaged.”

@don_larry1 wrote, “It's so sad reading the death of the newly appointed Chief of Army Staff (Lt. Gen Ibrahim Attahiru) Nigeria is a failed nation, if not why the happening of plane crash time to time. May the soul of the deceased officers rest in peace. So sad!”

@barnaby04 said, “Does it mean that an emergency rescue operation could not be activated immediately to save the lives of those on board the ill-fated plane that crash-landed inside the Kaduna airport or what? So sad we had to lose the Chief of Army Staff, Gen Attahiru Ibrahim, this way.”

A user, @abe_kowo wrote, “Naija. Shekau died on Wednesday. The chief of army staff (who actually came to mind while I was reading the news about the death of Shekau) has now been assassinated on Friday. Some powerful people outside and inside Nigeria do not want the war on terror to end.”

@waleilu stated, “Within the shortest period this guy has bought many war machines than his predecessors..... Anyway, may his soul rest well #COAS."

Another user, @RayNkah wrote, ”Ina lillahi waina illahi rajuin! What a difficult time it has been for military aviation in Nigeria in the last couple of months! May the soul of Ibrahim Attahiru, the recently appointed Chief of Army Staff, and other officers aboard the ill-fated jet, rest in peace.”

@nnekeejike wrote, “Nigeria deserves a break from bad news and incidents dear lord! He was on national assignment to Kaduna and he is no more #COAS Gen Ibrahim Attahiru, rest in peace as the nation mourns your loss. My thoughts are with his family and #NigerianArmy"

@Ziyos_sw said, “Sad days for me. First, it was my grandma now this news about the COAS whom I don’t know but I feel he is here to bring some change in the war we currently are in.”

For @efa101, the accident was not accidental. He wrote, “No, I'm not buying this 'crash gist'. Honestly, I'm not. He was taken out!!! This was calculated murder. Kai.

“I smell gimmicks in certain places, bro. His removal as theatre commander of Operation Lafia Dole is stirred in controversy (gist for another day). Now, Shekau gets killed yesterday and COAS dies the next day. Bro, I smell something abeg."

@Somescky said, “The rate airforce planes crash in Nigeria these days is alarming!! Which begs the question. Do they even have qualified pilots!? Are the engines sound enough!? Are these planes refurbished or new ones!? Why all the crash!!? Now we just lost a COAS in the most careless way ever!”

@omar_dannyy said, “Chief of Army Staff (COAS) Ibrahim Attahiru dies in a plane crash! surprised? When he said that past chiefs of staff should be probed for arms that were not bought, I knew he won’t last. Dem just off the fuel tap for the aircraft. You speak you die, you don’t speak you still die.”

@Bayonle_LDD wrote, “How can a plane conveying COAS just crash like that... just a few months after a military aircraft crashed... Things are not adding up but God knows it all ... may he rest in peace.”

Meanwhile, Yotam Kreiman, Deputy Chief of Mission and Consul of Israel in Nigeria @Yotam_Kreiman wrote on Twitter, “The Embassy of @IsraelinNigeria is shocked and sad by the untimely passing of the hero. #COAS #Attahiru was a friend of #Israel, studied at IDC Herzliya, and believed in making #Nigeria a safer country. We believe his vision for security, stability and peace will live on.”

The Chief of Army Staff (COAS) is the highest-ranking military officer of the Nigerian Army. The position is often occupied by the most senior commissioned officer appointed by the President of Nigeria. The current COAS is Attahiru Ibrahim.

Attahiru served as the Theatre Commander, Operation Lafiya Dole, before he was removed from the position barely nine months after he was appointed in 2017.

During his tenure as the Theatre Commander, Operation Lafiya Dole, the Theatre recorded many successes against the insurgents following concerted efforts of troops in the newly-launched Operation DEEP PUNCH 2 and Operation RUWAN WUTA in Sambisa forest

Some of the operations he led resulted in the killing of two key Boko Haram commanders, Abdu Kawuri and Abubakar Benishek, at Alafa in the Bama Local Government Area of Borno State.

His redeployment followed the deadliest attacks by Boko Haram insurgents on Biu town in Borno where at least 18 people were killed and 52 others seriously injured.

General Attahiru was redeployed to Nigerian Army Headquarters as Deputy Chief of Policy and Plans.

He was former General Officer Commanding, 82 Division of the Nigerian Army, Enugu.