Despite protests by hundreds of Nigerians in Johannesburg, Abdulmalik Ahmed still brought in 10 firms believed to be his cronies to start defrauding Nigerians. 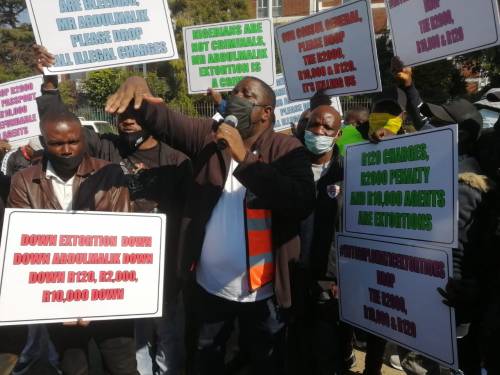 According to SaharaReporters, the Nigerian Consulate-General in South Africa on Wednesday licenced 10 proxy firms to rip Nigerians off going by illegal fees charged for passports and other services rendered by the CG.

Despite protests by hundreds of Nigerians in Johannesburg, South Africa on Tuesday at the Nigeria Embassy, the Consul-General (CG), Abdulmalik Ahmed, still brought in 10 firms believed to be his cronies to start defrauding Nigerians, going by several illegal fees charged by the CG.

According to a circular dated May 26 and obtained by SaharaReporters, the CG also exonerated itself from the firms in case of poor performance, saying, “The Mission shall not be held liable for the engagements between the agents and all clients who elected to seek their services.”

“For avoidance of doubt, no applications by proxy are to be accepted from any person or entity outside the above listed. The passport renewal process established by the Mission shall in no way or manner be circumvented, manipulated, abused or otherwise undermined. For avoidance of doubt, this includes all stages of renewal, namely application, submission, appointment scheduling, capturing, processing, production and collection.

“No undisclosed services may be rendered and fees charged must not exceed the approved amounts.”

On Tuesday, Nigerians held a large protest in Johannesburg to decry the extortions by the CG with protesters carrying placards, with various inscriptions like “Nigerians are not criminals, Mr Abdulmalik extortion is a crime” and “Abdulmalik, stop the extortion”.

SaharaReporters had on Wednesday reported that according to the Nigerian Union South Africa (NUSA) in a communique, Nigerians in the rainbow nation are extorted through diplomatic charges, hence the protests to air their grievances, in line with the constitution of the Republic of South Africa.

“We demand that turnaround time for passport renewal and replacement should not be more than one month and also put in place a system that will accept applications and give both capturing and collection dates electronically. This is because the unnecessary delays make corruption inevitable as applicants will be desperate to get their travelling documents on time.

“We demand that the unreasonable R2000 penalty for lost passport and extra R120 for passport capturing (after payment of legitimate $106 dollars and extra charges of R50 imposed by Consulate and OIS services) should be stopped with immediate effect. And also the immediate removal of the R10,000 non-refundable deposits collected from touts whom you have christened agents and refunds those whom you have collected money from already. This is because the cost will ultimately be passed to poor Nigerians.”

“Hon. Consul General sir, you claimed in one of your numerous communiqués that passport touts are milking Nigerians yet you are requesting them to pay you a ‘non-refundable bond deposit of R10,000’ for them to be able to operate within the premises of Consulate General. It is obvious that your intention is not to help Nigerians but to further inflict more pains on them by collecting kickbacks from these passport agents. These agents will, in turn, charge Nigerians exorbitant amounts in order to meet up with your demand of R10, 000 'non- refundable deposits'. It is a mirage on your claim sir that you are stopping touts; rather you are strengthening them to further milk Nigerians. We have it in good reports that most of the agents are your friends. We shall name and shame them in good time,” the communique also said.

Speaking to journalists, President of NUSA, Adetola Olubajo had said the protest was to demand the withdrawal of excessive charges dubbed “Diplomatic Extortion” by the Consul General of Nigeria in Johannesburg, South Africa, Abdul Malik M. Ahmed.

“Today the 25th of May 2021 is a day Nigerians in South Africa will shun the fraudulent and excessive diplomatic charges, levies slammed on fellow compatriots by our diplomatic mission officials led by the embattled Consul General Mr. Abdul Malik on passport renewal, lost or misplaced passports,” he had said.