Drama As 431 Ghost Workers Are Caught In Gombe, Over 600 Others Put On Investigation


This was disclosed by the committee for the Integrated Payroll Payment Gateway and Human Resource Management Information System. 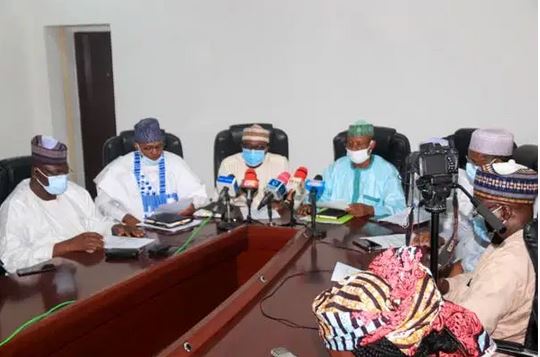 The government of Gombe State has said that it has uncovered 431 ghost workers and suspended them from the state government payroll system for the month of May 2021, according to Vanguard.

This was disclosed by the committee for the Integrated Payroll Payment Gateway and Human Resource Management Information System.

Briefing newsmen on the development yesterday, the Commissioner of Finance and Economic Development, Muhammad  Gambo Magaji also disclosed that another 691 staff are billed for investigation due to insufficient attendance as indicated by the biometric data capture machine.

He equally revealed that based on the earlier directive issued by the State government for workers on grade levels 1‐12 to work from home as part of measures againstcovid-19, a total of 244 staff with a total salary strength of Seven million two hundred and forty eight thousand twenty seven naira were also captured by the biometric to indicate transparency and accountability.

As for the local government areas, the Finance Commissioner said 45 staff of Kwami LGA have been suspended from the payroll of the Local government, thereby saving a total of seven hundred and four thousand four hundred and eighty eight naira (704, 488) in the process.

He added that another four staff from same local council have also been sanctioned for incomplete enrollment with a total salary strength of one hundred and forty seven thousand two hundred and seventy two naira (147, 272).

The Commissioner said in Gombe local government council, two staff have been suspended while another two are to be investigated based on insufficient attendance thereby making a saving of one hundred and forty four hundred four hundred and twenty three naira respectively (N144, 423).

Muhammad Magaji said the exercise was basically meant to check fraud in the civil service and not intended to witch hunt anyone.

“The exercise will help government ascertain the vacuum in the state’s civil service for immediate recruitment from the teeming jobless youths in the state”, Magaji said.

Earlier speaking the chairman of the committee,  Alhaji Bappayo Yahaya advised civil servants in the State not to treat the biometric data capture exercise with disdain so that they will not have themselves to blame.

Alhaji Bappayo Yahaya, who is the State’s Head of Civil Service, stressed that the administration of Governor Muhammadu Inuwa Yahaya is determined to work with only genuine civil servants who are committed to the growth and development of the system and the State.

“This exercise is not intended at targeting any civil servant for witch hunt, rather it focuses on strengthening the system for efficiency and effectiveness.

The vice chairman, Nigerian Labour Congress NLC, Gombe State Chapter, comrade Bappayo Abdulmumini said NLC is fully in support of the biometric data capture exercise to checkmate civil servants who are in the habit of not showing up for work.

He said so far no any civil servants has approached the congress with any complaint over his or her suspension from payroll, which he said is a pointer that workers suspended in the exercise are really guilty of their crime.

Comrade Abdulmumini said the Congress has been part of the committee’s membership since the commencement of the biometric exercise and is therefore committed to ensuring  justice is done to workers in the state.