Nigeria's President Muhammadu Buhari has been told to honour those who died in the Biafran war by declaring 30th May a public holiday. 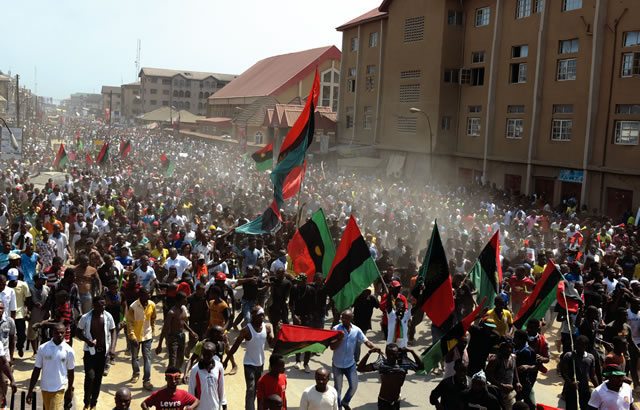 Biafra
The Ohanaeze Ndigbo Youth Council Worldwide has revealed why President Muhammadu Buhari should declare May 30 a public holiday.
According to the group, this will be another opportunity for the government to win over the region.
The group made the call while reacting to the compliance level of the sit-at-home declared by the Indigenous People of Biafra, IPOB.
This comes as the sit-at-home order witnessed the highest level of compliance ever.
Speaking through a statement by its President-General, Mazi Okwu Nnabuike, the OYC said the compliance level was another indication that the people were feeling so sidelined and rejected by the current federal government.
Okwu said “the Government has had several opportunities to win back the confidence of Ndigbo but it threw it away. One of such opportunities was the appointment of Army Chief, which the Government could have used to right wrongs but it never did.
“However, we call on the Buhari Government to declare May 30 as a national public holiday in honour of over 5 million Biafrans killed during the civil war.
“Since the Government recognized June 12 in honour of a single person, it should find no difficulty in honouring these over 5 million heroes, including children.”
Okwu further saluted Ndigbo for the peaceful nature of the sit-at-home, stressing that “we are glad that there was no confrontation with security agencies.”
Top Stories