"Someone Actually Wrote This And Signed It Off With The President's Name, I'm Repulsed By This "- Dawisu Reacts To President Buhari's Tweet


Dawisu expressed his dissatisfaction over the statement as he believes president Mohammadu Buhari is not the handler of his Twitter account.

Salihu Yakasi Tanko, aka Dawisu, a former aide to Governor Ganduje has reacted to the tweet made by Buhari about those destroying Government infrastructures in the country, stating that they would receive the shock of their lives.

Following a meeting with the INEC Chairman, Mahmood Yakubu, and other electoral commissioners in Aso Villa, Abuja, President Buhari took to Twitter to issue strong warnings over the series of attacks on INEC facilities especially in the South-Eastern part of the country.

In one tweet, the president said those who want the destruction of the system will soon have the shock of their lives.

The tweet has since sparked up outrage online, with Dawisu expressing his dissatisfaction over the statement as he believes president Mohammadu Buhari is not the handler of his Twitter account

He wrote: "We've given them enough time" someone actually wrote this and signed it off with the Presidents name, and posted it on his official handle. I'm shocked and repulsed by this tweet ". 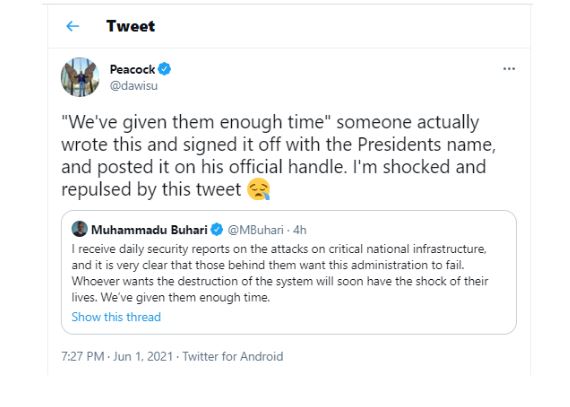