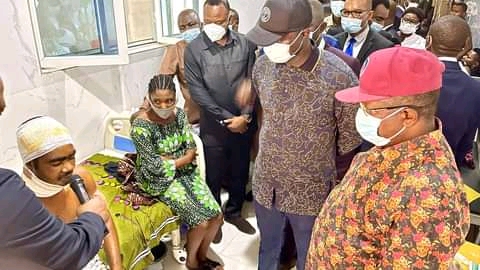 Governor Umahi visits victims of herdsmen attack
The Governor of Ebonyi State, David Umahi has paid a visit to the people of the state attacked by Fulani herdsmen.
Recall that we reported how the people of Izhi-speaking people of Nwori Nduobashi, Odoke, and Obakotaru in Addo Local Government Area of the state were attacked by suspected herdsmen.
Governor Umahi condemned the attack when he visited victims of the attack at the Accident and Emergency Unit of the Alex Ekwueme Federal University Teaching Hospital, FETHA 2, Abakaliki.
The Governor, who expressed sadness on the colossal loss of lives orchestrated by the senseless killings by the herders, wondered how human lives no longer mean much in the sensibilities of Nigerians.
"What I saw this afternoon is nothing but an act of wickedness and satanism, I do not know for any reason why people should be raping two-year-old children, putting a knife on one year old, killing little children, killing fathers and mothers for what reason, and what worries me most is that the Deputy Governor of Benue State came on air to say that they don’t know whether these people are from Benue State or Ebonyi State, that is a height of irresponsibility.
“We know we have boundary problem with Benue State but we have a buffer zone and these places are not within the buffer zone, these people are citizens of Benue State, paying their taxes in Benue State, facilities, everything in Benue State, yes, some of them are Ebonyi speaking people, we have Igbo speaking people in Edo State, in Rivers in Akwa Ibom and even beyond the shores of this country but that does not mean that security-wise, are responsible.
“Everything should not be reduced to blame games, people of Benue State should form their own kind of Ebubeagu to protect their people instead of blaming Mr. President, Mr. President cannot be everywhere.
“If they want to belong to Ebonyi, let Benue people allow them so that we can get that place and protect their lives. They will fail to protect them and still pretend that the place is in Benue State.
The Governor advised AK-47 carrying herders and criminals to stay out of Ebonyi State as the state is not safe for them. “And let me warn, anybody that is not security agency with Ak-47, it doesn’t matter who you are, if you come to Ebonyi with it, you must be fought to a standstill. Whether it is sticks, sand, or fire, anything we see, we will use and fight you.
“Enough of this madness; it is sheer madness. This kind of wickedness can bring a curse upon a nation; it’s not acceptable.
“When madness meets with madness, there is a balance of terror and sanity will return. We cannot fold our hands and watch our people slaughtered as such.”
He condemned the laxity of the Benue State Government in taking responsibility to protect their citizens who duly pay their taxes and other obligations to their State Government, noting that the Benue state government should have visited the hospital where their indigenes are receiving treatment before now.
He called on the Izhi-speaking people of Benue State to form a vigilante to protect themselves from foreign incursion instead of waiting on the Benue State Government that is averse to complaints than solutions.
He promised to foot the medical bills, provide shelter and feeding of the victims receiving treatment at the Alex Ekwueme Federal University Teaching Hospital, Abakaliki.
The Governor while commending the Chief Medical Director of FETHA, Dr. Emeka Onwe, for his proactiveness in handling the situation, called on people to desist from politicizing the attack.
The victims said they are indigenes of Benue State who were attacked by the herdsmen in the early hours of 30th May, 2021 killing them with guns and machetes.
Some of them, Lebechi Nwedoga and Stephen Nwagu, said the Izhi-speaking people of Nwori Nduobashi, Odoke and Obakotaru were completely wiped by the marauding herdsmen. 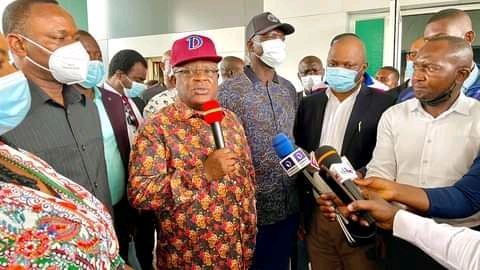